A warning shot across our bows?

An article appeared in yesterday’s Scotsman in response to last week’s blog from our chairperson, Prof Cliff Hague, in which he reflected upon our recent successful “Whose Festival is it Anyway?” Cockburn Conference. In the article, local Arts journalist and commentator, Brian Ferguson enthusiastically reported the remarks of Major-General Buster Howes at a recent Edinburgh events summit held by the Edinburgh Chamber of Commerce. 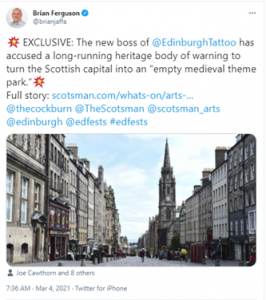 According to the article, Major-General Howes apparently chose to use his first public speech after being installed as chief executive of the Edinburgh Military Tattoo, to attack the Cockburn Association, Scotland’s oldest conservation organisation. The former soldier and Chief Executive of high-end tourism venture “Here be Dragons” is quoted saying:

“The naysayers of the Cockburn Association persist in thinking that an empty city is the best city – an empty medieval theme park. That’s not what Edinburgh is about. It’s about glee and dynamism and dancing and singing and live events.”

It’s unfortunate Major-General Howes chose to attack the Cockburn at an event at which we were not present (perhaps our invite was lost in the post?) and that he didn’t manage to attend our excellent (and public) “Whose Festival..?” summit, held just a few weeks ago, at which representatives of the culture and events industries, academics, arts professionals and local journalists shared their ideas with the public in a more collegiate manner.

We also don’t know if Major-General Howes made it along in January 2020 to our “City for Sale” public summit, attended by over 850 engaged and energised local residents. A packed-out hall in Tollcross, at which one attendee exclaimed “the last time I went to a meeting this size it was about the Poll Tax!”, heard sincere concerns expressed about the direction of travel taken by those who continually seek to commercialise public spaces in Edinburgh.

Since publication, we have been tagged on our Twitter account by a number of local residents who are both supportive of and downright opposed to Major-General Howes’ reported position. Notable among the Tweeters who supported his view were those who claimed that the city is “empty”, with “no people, no vibrancy, it’s dystopian…” and another claiming that “Temporary Events do not cause permanent harm to heritage” and that the city centre offers “the most impressive Heritage asset in Scotland in the backdrop.” [Italics added]

The city is not “empty”, nor is it a pop-up theatrical “backdrop” available for the private commercial use of Festival event companies. The Scottish Government requires its citizens to work from home where they can, it has also legislated for the closure of many hospitality businesses and non-essential retailers during this public health emergency. So, it is therefore not surprising that locations such as the High Street have witnessed far fewer people wandering around than might normally be the case. Interestingly, other neighbourhoods elsewhere in the city do still have far greater footfall. So why is that?

As Cllr Kate Campbell, housing convener of the City of Edinburgh Council, explained in April 2019:

“Short term lets are having a terrible impact. They are hollowing out communities, both in the city centre and increasingly across Edinburgh… we believe there is a huge impact on housing supply.”

In 2018 we hosted a conference, attended by industry experts, academics and residents, that concluded that there was an urgent need to regulate the short-term letting industry. The Scottish Government apparently agreed with our findings, eventually launching a consultation on licensing scheme and planning control areas in Scotland. Local Govt minister Kevin Stewart MSP, told the Scottish Parliament in 2019:

“We know that in certain areas, particularly tourist hot spots, high numbers of short-term lets are causing problems and often make it harder for people to find homes to live in.“

Research from the Scottish Government from May 2019 revealed that:

“In Edinburgh, the Airbnb data showed Old Town and part of the New Town as the most dense one square kilometre of Airbnbs in Scotland.” Government researchers identified clear “signs of saturation in the Old Town”,

with 79% of those properties listed for short-term rental being “entire properties” (rather than a single room), which was more than double the rate of any other ward in Scotland. 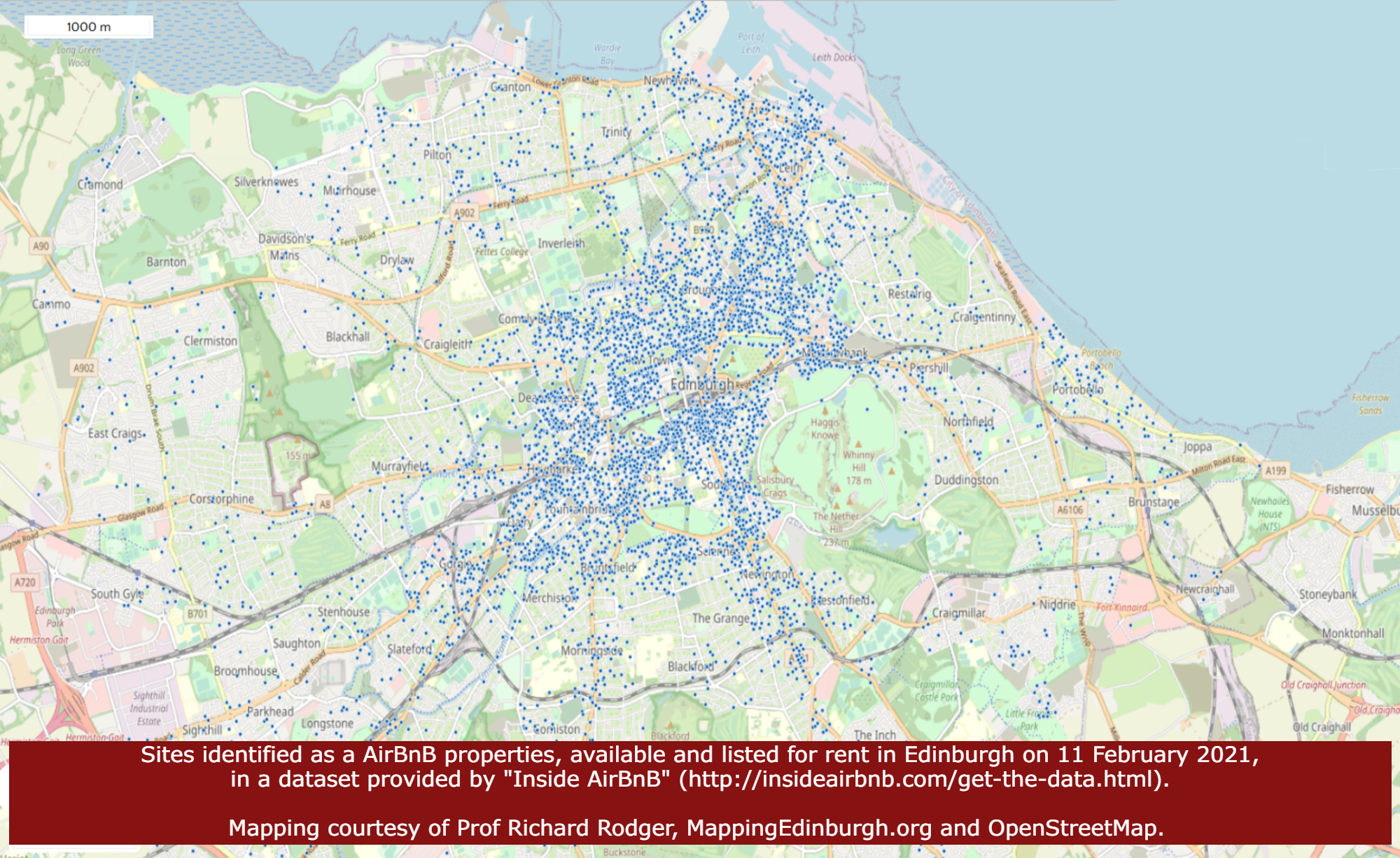 That single square kilometre of the Old Town was found to contain 812 active AirBnb listings at that time. More recent data from Inside AirBnB, which calculates the locations and volume of AirBnB properties in cities across the world, suggests that there were in excess of six and half thousand homes being offered for short term let across the entire city by AirBnB last month alone (click the map to expand).

As the tourism, festivals and events sectors have grown over the last decade, so has the expansion of short-term lets which, in turn, has driven a significant depopulation of the city centre’s permanent households. This contemporary urban clearance has perhaps given Major-General Howes the erroneous impression that the city has become an “Empty medieval theme park”, but that is not an opinion we share.

The Cockburn Association also does not believe that “an empty city is the best city” as Major-General Howes is reported as suggesting. We believe that Edinburgh is a living, breathing, vibrant capital city, that needs to enhance, sustain, nurture and protect its permanent population and not promote activities that actively or unintentionally displace and undermine its residential core.

We agree that Edinburgh’s Festivals are an integral part of the city, so much so that on the 30th January we hosted a well-attended conference that shared our affection for these annual events while underlining our passion for the city’s architectural heritage and the civic amenity for all those who live here. We look forward to continuing to positively engage in this vital dialogue with local residents, businesses and festival/cultural events stakeholders in the months and years ahead.

We’ve been protecting, preserving and promoting Edinburgh’s built heritage, natural environment and civic amenity for 146 years. If you agree with us, join here today! 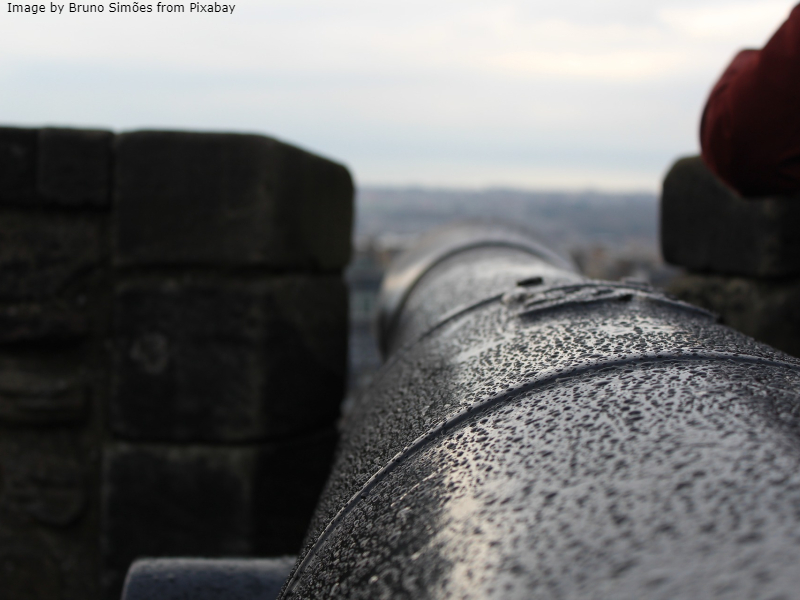