The Filmhouse – Proposals for a new venue in Festival Square

Summary: The Cockburn Association’s formal response to the planning application for the Centre for Moving Image (CMI) for a new centre for film with ancillary uses by Richard Murphy Architect. 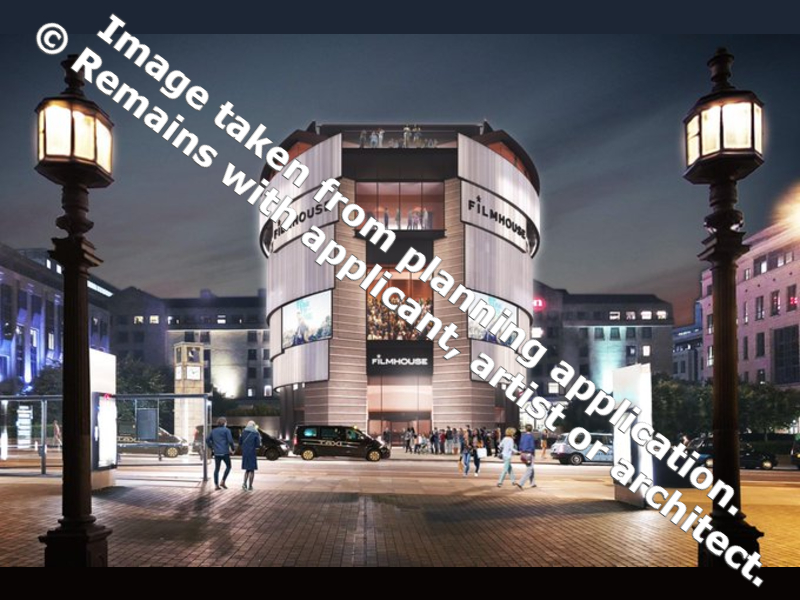 The Association  OBJECTS to this proposal.

In doing so, we recognise that the Filmhouse is an institution that is well-established and well-loved. We recognise that it is well used by residents and it is a positive cultural and community asset.

Our objection is based on the use of Festival Square as a development site. The proposals are contrary to Local Development Plan Policy Env. 18 Open Space Protection which states:

“Proposals involving the loss of open space will not be permitted unless it is demonstrated that:

a) there will be no significant impact on the quality or character of the local environment and
b) the open space is a small part of a larger area or of limited amenity or leisure value and there is a significant
over-provision of open space serving the immediate area and
c) the loss would not be detrimental to the wider network including its continuity or biodiversity value and
either
d) there will be a local benefit in allowing the development in terms of either alternative equivalent provision
being made or improvement to an existing public park or other open space or
e) the development is for a community purpose and the benefits to the local community outweigh the loss.”

In our view, this development would result in a significant impact to the local area and would undermine the character and potential of an existing civic space. There would be a significant loss of open space, which would not be retrieved elsewhere. It would also set an undesirable precedent, and create expectation of development, for other open spaces
within the city.

The implications of Covid-19 in the short, medium and long-term is a factor that should be considered relevant for this application. The huge impact on the hospitality sector of the city questions the need for new development with additional hospitality provision. Cultural venues demanding large audiences in crowded venues will take time to recover, if they do.

The enormous shift to digital platforms could have a significant impact on the business case for this proposal, which we assume will be reliant on public support for a substantial part of its build cost. We also understand that the city is “over-screened” with underused cinemas across the city.

The global pandemic has illustrated the huge importance of civic space in the City. The Streets for People initiative sought to reclaim space for pedestrian and civic use. It would be ironic in the extreme for the City of Edinburgh Council to support the loss of open space which it owns.

We acknowledge that the current Festival Square is not a hugely successful open space. The interaction of activities on its edges is not optimal and it can appear as a cold, wind-swept, purpose-less area. However, this should not be taken as a reason for its loss. We reject the argument that a poorly designed or managed space automatically means that it has no
value. Festival Square provides an opening along a very dense Lothian Road, a place where the eye can travel beyond the buildings framing it. As such, we are not convinced by the arguments put forward for its use as a development site.

The Cockburn believes strongly that the square can and should be improved, so that it could provide an excellent hard-surfaced civic space capable of hosting major events and festival activities. Alternatively, it could be redesigned or “greened” as a carbon/climate mitigation space to help the city meet its aspirations to be carbon-neutral by 2030.
It is for this reason that the proposals should be refused consent.

Alternatives
We note that the management of the Filmhouse does not feel that the existing building is fit for purpose but there appears to be some disagreement on social media from users. This needs to be fully appreciated and understood before any contemplation of sacrificing existing open space.

The Cockburn is aware of previous proposals to redevelop within the existing premises and believe that these should be revisited as part of a wider appraisal of alternatives. Indeed, our preference is the refurbishment of the existing Filmhouse building, accepting that there will need to be some compromise with the existing fabric of the listed building. This refurbishment approach might include attempting to secure the ground floor (or part of) Capital House to expand the front of house facilities, freeing up space within.

We have not seen a full options appraisal. There may be a range of other sites or approaches available. The restructuring of Princes Street from retailing to a wider leisure offering suggests opportunities too.

The proposals
The Cockburn commented on the emerging proposals as part of the PAN process. Whilst we acknowledge the cultural value of the Filmhouse and its role in Edinburgh’s civic life, we were not convinced of the case to use Festival Square. We accepted that the Square is not optimal in function but could be significantly improved. In terms of the proposals, we advised that the building should serve the square and not just be the outside of it. The narrow footprint and vertical disposition over 8 floors suggest major circulation issues and that we were not convinced that the proposals will function as well as argued. We were also concerned about the elevational treatment and suggested the need for a full Visual Impact Assessment of the scheme given its height.

Current proposal – headline issues
Whilst some of our points raised in the PAN have been addressed in part, the majority of these concerns remain. Fundamentally, the case has not been made to lose this civic space.

Whilst we appreciate the desire of the Filmhouse to create this new facility, we are not convinced of the need for it nor the requirement to include the scale of ancillary uses including offices for the CMI, which could be located elsewhere, thereby reducing the volume of new building required.

Current proposals – observations and views
We offer these comments without prejudice to our prima facie objection to the use of Festival Square in principle.

The reduction in height helps reduce the impact of the proposals in this setting but does not go far enough to reduce its visual impact to acceptable levels. There remains much concern about the visual intrusion that will result, especially from key views from the Castle and up and down Lothian Road. The height of the building will also affect the available daylight to surrounding buildings creating further difficulties for existing buildings to improve their energy consumption figures by increasing the need for artificial lighting during daylight hours at the very least. Additionally, it will greatly reduce the available light in the remaining parts of the square affecting both desirability, accessibility and the inherent safety open spaces provide for pedestrians at all times of the day or night.

The issue of internal circulation remains. Given the vertical emphasis of the building, the arrangement of stair and lift access seems inadequate, especially if the building is in full use. The servicing of numerous cafes, bars and restaurants from a basement kitchen by dumb waiters is questionable and poses issues of longer-term operational sustainability. For
example, we are aware that premises such as the Tower restaurant struggled with this arrangement.

The substantial amount of underground facilities creates challenging means of escape in emergency situations. There appears to be long distances to refuges and external escape routes. Whilst this will form part of the Building Warrant process, public safety must form a part of any planning assessment.

External arrangements – The building turns its back to the external spaces in most areas and does not help to animate remaining parts of the square. The problem with Festival Square is the lack of active engagement at ground floor level with the existing buildings. There does not seem to be any real improvement of this deficiency with this scheme. Indeed, the proposals could have the opposite effect, dividing the square into a series of smaller and less coherent spaces which would not have the scale to allow for other event activities. This is especially the case to the south where the space between Capital House and the proposal is very constrained, without real purpose and would by in shadow for much of the day. The introduction of raised planters/seating areas reduces the potential flexibility of the remaining spaces to accommodate markets, etc.

Elevational Treatment – The aspiration to create an iconic building of itself and not of the city is a clear objective of the client and the architect. If acceptable in this location (which we disagree with), and given the buildings that immediately surround the proposal, we acknowledge that there is no unified architectural language. However, we are not convinced
by the wide film screens as part of the elevational treatment and feel that they should be deleted. The desire for the client to “show off their wares” is understandable but if it is OK for the Filmhouse, why not all the other cultural venues in the city? This will set an unwelcome precedent.

Wider Priorities for Cultural Infrastructure Investment
Whilst we would not usually address wider financial/investment issues as part of a planning application, there is no doubt that this proposal will require substantial amounts of public money. There is also no doubt that existing cultural venues in the city require significant amounts of investment for repair and refurbishment to remain fit for purpose. In an era of constrained public investment, the Cockburn suggests the repair and maintenance of existing facilities should be given priority for access to the public purse than new projects.

The existing Filmhouse
Should this proposal be permitted, the abandonment of the existing well-loved buildings needs to be addressed. We argue that the CMI/Filmhouse as a moral responsibility to consider the future of these buildings, and they shouldn’t be left to the development market to decide. A design brief should be prepared to guide suitable and sensitive redevelopment.