Demolition and Replacement of Rosebery House

Our objection to the demolition and replacement of Rosebery House in Haymarket with a bland, taller and wholly inappropriate new office block 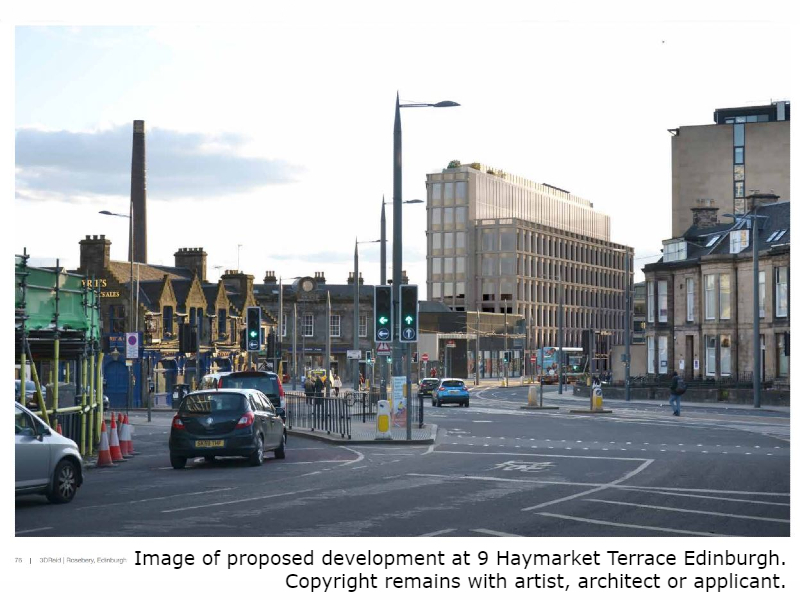 The Cockburn OBJECTS to this application.

It is the Cockburn’s view that the current proposals are too tall, too bulky, bland and inappropriate for its largely residential context on the edge of the city centre.

The absence of any evidence in the application relating to the potential to refurbish rather than demolish an apparently functional office building is unacceptable, particularly in the context of Edinburgh’s high profile carbon neutrality targets. Evidence should be provided that the existing office block cannot be reconfigured to meet modern office working requirements and cannot be brought up to an acceptable energy performance standard so avoiding the significant carbon implications of demolition and rebuild.

Refurbishment must now be the starting point of any significant office redevelopment if Edinburgh’s commitment to tackling the climate emergency and achieving carbon neutrality by 2030 is to have any meaning. Successful refurbishment and reuse may have the potential to deliver some or all of the stimulus to the growth of the local, regional and national economy and  opportunities for employment in Edinburgh which are claimed for this redevelopment.

The developer appears not to have sufficiently considered the scale and setting of their proposed building and appears to be  attempting the maximise the amount of office accommodation that can be crammed onto  limited and constrained development footprint.

The developer’s assertion that the proposed building’s design will enhance the relationship of the site with the New Town Conservation Area and the Old and New Towns of Edinburgh World Heritage Site is, we believe, difficult to justify.  We believe that, for example, the architectural language of the New Town or of the remaining industrial heritage of Haymarket is not, as asserted, significantly evident in the  proposed design.

We are also concerned that the height and mass of the proposed building will create a ‘canyoning’ effect on adjacent approaches to Haymarket Station which will exacerbate existing noise, and particularly, air quality issues.

If the principle if demolition is accepted (and we believe that there is  insufficient evidence to support this) then redevelopment in this location should be limited to around four stories with a sympathetic roof structure in keeping with the surrounding cityscape, rooflines and residential character of much of this area.

The proposed design does improve some aspects of the public realm, particularly in relation to the local trams stops. But on such a constrained site it has clearly proved impossible to provide significant accessible greenspace  at street level.  Moreover, it is our view that the design overall is too tall, too bulky, bland and inappropriate for its largely residential context. As such it will significantly detract from the local area’s public realm and create an incongruous  point of arrival into the Haymarket area and city centre and will negatively impact on views to and from the city centre.