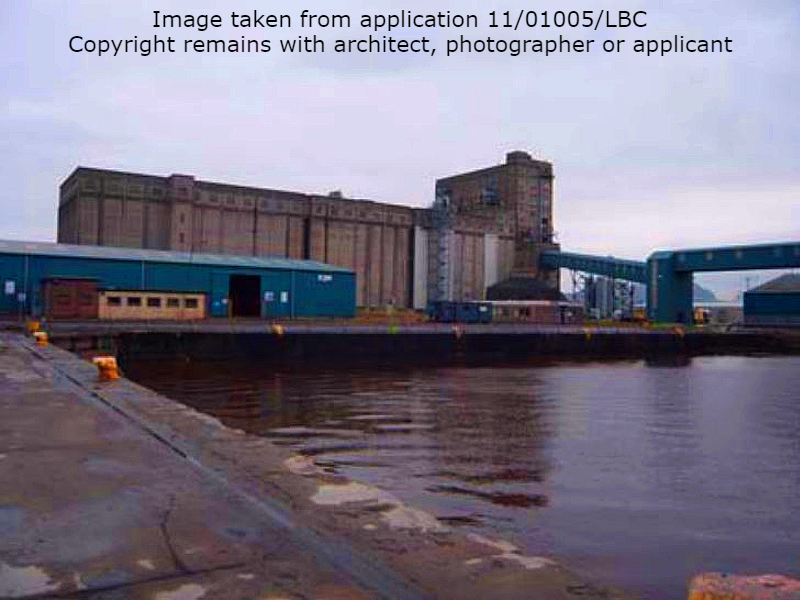 The Association has studied the plans for the above proposals and wishes to make the following comments.

We have commented thoroughly on this building’s owner’s Section 36 Application to build a Renewable Energy Plant on this site under the Electricity Act 1989. The outcome of that application for a ‘deemed planning permission’ under Section 57(2) of the Town and Country Planning (Scotland) Act 1997 (as amended) from the Scottish Ministers is awaited and may be some time off. In the meantime it is uncertain whether the proposed biomass plant will be granted permission and, in a rapidly changing energy market with the impact of subsidy an essential component of all waste energy, whether it will still be economically viable. It is therefore too soon to consider a demolition of this unusual Category ‘B’ listed building citing the proposed biomass plant as a reason for demolition.

Though a distribution building, the grain silo is an important relic from Scotland’s recent industrial past and one of a limited number of survivors of such buildings around the world. It is noted for its intact nature, completeness and vast size. However any scheme to preserve the building would do so from the point of view of its cultural significance for future generations, which can be conveyed to a large extent without conserving the whole building.

Similarly, the argument that the building cannot find a new use and that this warrants not advertising it under the SHEP charter because of its location in a working port, and the limitations imposed by the International Ship and Port Security Code is spurious. Forth Ports has claimed since the early 1980s that this part of the Port of Leith was surplus to commercial requirements and being wound down.

Various masterplans and planning permissions exist relating to the full redevelopment of this area over the coming decades. The grain silo could form a unique and very characterful component of any such redevelopment.

We therefore think that the first priority should be repair and stabilisation of the building to prevent further deterioration, a duty which is implicit on the current owner through the listing procedure.

We are firmly opposed to the granting of permission for the demolition of a listed building such as this which is the last of its type in Scotland, where the clear and agreed procedures for dealing with alternative uses for the building so as to prevent demolition have not been followed.

We therefore wish to object to this application.