On the 25th Feb, the City of Edinburgh Council opened a survey asking for comments on their proposals for “George Street and First New Town”. During the last century and a half, the Cockburn Association has made numerous interventions to protect and enhance the architecture and amenity in this iconic street, these are our comments on this latest proposal. 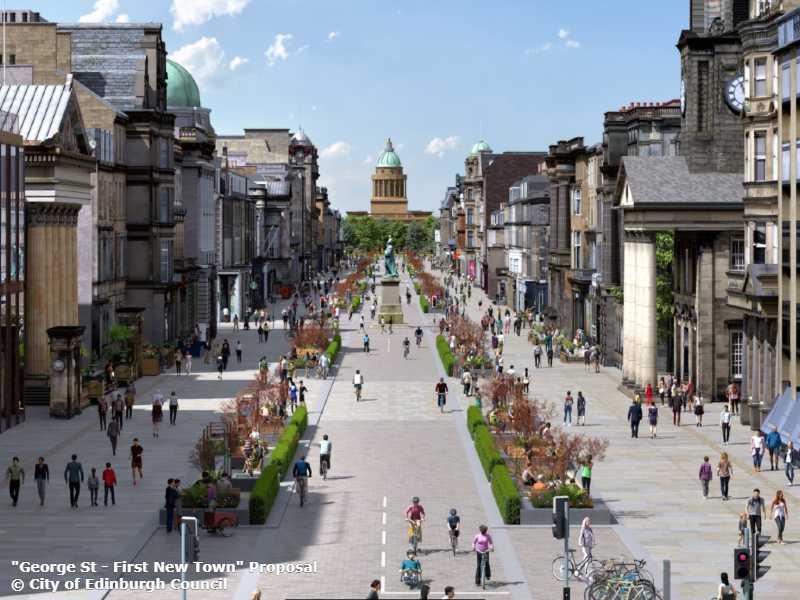 The Cockburn has been involved in this project since the outset and has seen the designs evolve and mature.

The Experimental TRO conducted several years ago showed an appetite for change to George Street and its shift from a trafficked street to a destination for civic living.  Key was increased pedestrian space, facilitating the east-west cycle route and generally producing a more amenable place whilst respecting and enhancing the qualities and characteristics of the World Heritage Site.  We endorse all of these objectives and feel that the designs have generally reflected these well.

In addition, we offer these specific comments:

On the subject of trees, we acknowledge the significant public interest in introducing trees into the street.  Indeed, we also acknowledge that throughout the history of the Association, we have been long-standing advocates for street trees, having campaigned for them in the late 18th and early 19th centuries.

Since this time, our understanding of the significance of George Street as one of the centrepieces of the World Heritage Site, inscribed in 1995, has grown hugely.  George Street was not designed as a boulevard but as a set-piece along a strong axis from Charlotte Square to St Andrew’s Square, with the intervisibility of each crucial to its urban form.  The current proposals have evolved to respect this key feature, which we welcome. If trees were to be introduced, it is important that this key element of the street is not undermined.

There are also challenging design issues including a substantial amount of undersurface voids including cellars and service tunnels, which not only introduce planting and technical hurdles but also legal and ownership ones too.  These would need to be fully explored and considered, with additional consultative programmes put in place if it were to advance.

Similarly, not all trees are equal.  There is a very real difference between ornamental species versus “forest” species are considerable, and clarity of thought in this is required.  If underground planting is not possible, and large plant pots required, this would limit the scale of trees possible, which would also limit carbon, biodiversity and other benefits accordingly.  Finally, and as already noted, a long-term management and maintenance regime specific to this street would be required.