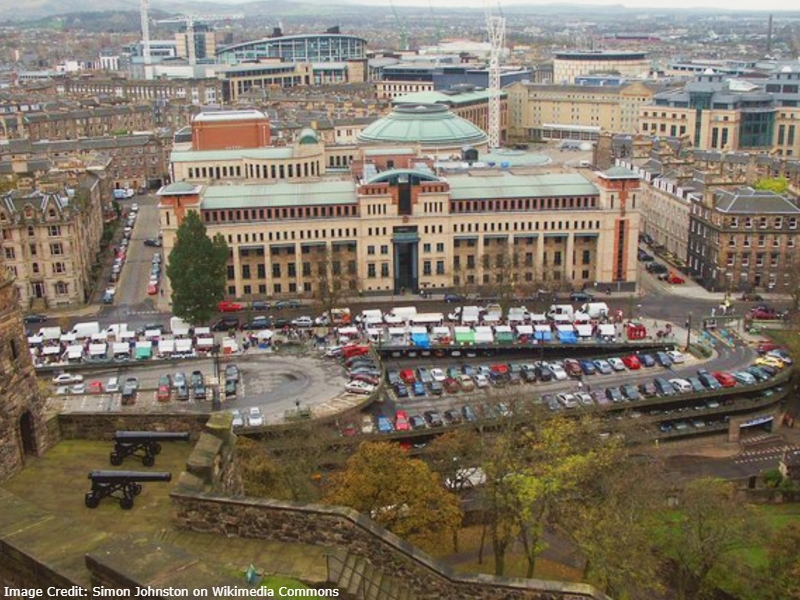 The Association has considered these plans for the use of the upper decks of Castle Terrace Car Park as a Fringe venue, which we support in principle.

The Cockburn has advocated that soft surfaced areas such as public parks should not be used for infrastructure-heavy events due to the damage they cause to the ground and to the loss of essential public amenity space, even for relatively short periods of time.

As such, the hard surfaced area at Castle Terrace car park seems well-suited for such activities.

We also support the dispersal of Festival activities across the city and city centre.  This site is close to other suitable event venues such as Festival Square and Conference Square as well as bars and restaurants on Lothian Road and in the Grassmarket area nearby.  Historically, the Fringe occupied the “hole in the ground” successfully before the development of Saltire Court.

However, we have some concerns with the application.  The staging faces south towards Castle Terrace, which does have residential properties who may be impacted by noise intrusion from performances.  It is therefore important that noise mitigation measures are considered as part of this application process, and not delegated to non-statutory bodies such as the Edinburgh Festival Fringe Producing Venues Group nor be considered as a licensing issue.  Housing Policy 7 (In appropriate uses in residential areas) states, “Developments, including changes of use, which would have a materially detrimental effect on the living conditions of nearby residents, will not be permitted”.  We accept that this is not a wholly residential area but the policy does indicate that it seeks to prevent any further deterioration in living conditions in more mixed use areas which nevertheless have important residential functions.  As such, residential amenity is a key planning policy, and evidence of its effective management is required in this planning application.

We also note the proposal to use a second level of the car park as a light show and hospitality venue.  No plans have been submitted to show how this will be set out, including toilet provisions, etc.  These details must form part of this application.  The Cockburn has no concern with the artistic installation but we have strong reservations about pop-up food and drink provision in general and at this location.  In our view, it is more important that established, permanent year-round neighbouring pubs and restaurants benefit from trade associated with this type of use.  No details on the scale or operations are available but it is possible that almost half the site is given over to its use as a licensed premise.  We believe that this should be deleted from the application or at least reduced to a minimum level as to encourage participants to use local premises first and foremost.

We suggest that a condition of consent should include a programme of monitoring including noise and associated traffic/travel impacts.

Finally, given that relaxed planning regime suggested by the Scottish Government as part of its Covid recovery plan, and in recognition of the development of an Events and Filming in Public Spaces management plan by the Council, consent should be restricted to this year only.