Overview: The City of Edinburgh Council want to hear public views on their draft 2030 Climate Strategy for Edinburgh. The draft strategy outlines how they will work with citizens, communities and public, private and third sector organisations across the city to deliver a net zero, climate ready Capital by 2030. 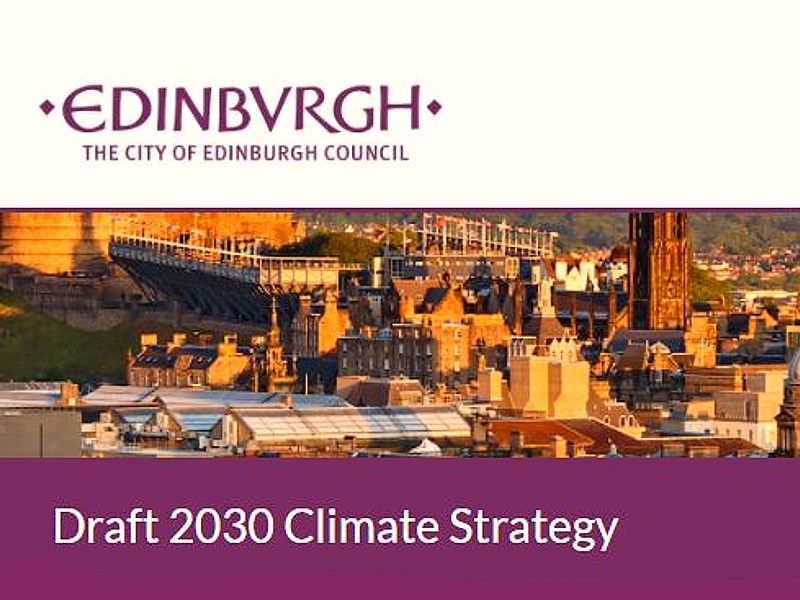 The City of Edinburgh Council’s  draft  2030 Climate Strategy in is the latest in a long line of related vision statements, strategies, action plans and initiatives which the Council and its partners have launched over the last decade or so.

The 2030 Climate Strategy seeks to be more than a carbon reduction plan in that it also attempts to integrate aspects of climate change adaption, sustainable economic development, issues of social equity and well-being, for example. In this it is only partially successful.

There are undoubtedly some positive aspects to the strategy, in particular, the strategy’s ambition to achieve a significant carbon reduction for the city well in advance of the equivalent Scotland-wide target is ambitious.

However, a final judgement on whether the strategy will be able to deliver the necessary projects at scale and at pace to achieve a meaningful citywide carbon reduction by 2030, and accrue additional societal benefits for the city’s citizen, will only be possible when the strategy’s implementation plan is published at the end of 2021. This must have appropriate costings, timescale, project owners and carbon reduction metrics to enable an assessment of the achievability of net zero carbon by 2030.

The City of Edinburgh Council has been supporting and facilitating community discussions and practical actions to address the carbon mitigation and climate adaptation for many years and this activity has undoubtedly intensified in recent years. However, it remains unclear if such activities have influenced, or even reached, most local citizens.  And it is equally unclear if hard to reach groups and minority groups have engaged meaningful in climate change initiatives across the city.

The current Covid-19 pandemic has placed restrictions on the capacity of the council to facilitate face-to-face activities during its consultation of the 2030 Climate Strategy.  However, the relaxation of Covid-19 related restrictions over the summer has allowed some suitably adapted community consultations activities to take place across Scotland.  This being the case, and given the importance of the 2030 Climate Strategy, more effort should have been made on the part of the council and its partners to run face-to-face consultation activities in and with Edinburgh’s communities of place and communities of interest.

The role of citizens and communities going forward will be crucial. However, it remains unclear how citizens are to be given a pro-active role in the implementation of this strategy.

‘Ownership’ at a community level of the strategy’s aims and actions will be required if they are to have value. Worldwide, there are models of excellence in terms of successful, community-based sustainable development and climate action on a citywide scale.

‘Sustainable Seattle’ is a particularly well-established and embedded example of good practice, which we recommend here in Edinburgh.

An implementation plan for the 2030 Climate Strategy is due out towards the end of this year.  This requires a further consultation exercise before it is approved. This will be a further and necessary opportunity to determine if the actions being brought forward by the climate strategy are likely to achieve a significant impact by 2030.

A thorough and careful assessment of the timing, costing and funding of actions is particularly required since Edinburgh seeks to achieve carbon neutrality by 2030 rather than to align with the Scotland-wide target of 2045. This seems particularly ambitious and final approval for the strategy should be contingent on confirmation that realistic and achievable actions are in place.

Many visions, strategies and plan have been approved in Edinburgh over the last decade or so which seem similar to the 2030 Climate Strategy. There is little evidence that they have achieved anything significant in terms of climate mitigation or adaptation over and above what would have been delivered if such plans had not been in place. The impacts of the strategies actions should be assessed on an ongoing basis against prior approved milestones and performance indicators.

The net zero target of the 2030 Climate Strategy is based around the concept of territorial emissions. Arguably this does not include a significant amount of additional carbon emissions which could be attributed to the city and its citizens. It would be more than helpful to understand the city’s net zero target in the context of other emissions such as off-shored emissions.

Of particular interest to the Cockburn is embedded carbon and its relationship to redevelopment and new build. Given the expansion and growth expected for Edinburgh in the near term the emission of embedded carbon from the draft strategy is notable and undesirable.

The need to adapt Edinburgh to the unavoidable impacts of a changing local climate is embedded throughout the strategy. However, consideration of this important action area appears to be entirely subservient to the strategy’s headline net zero target. This is more than unfortunate since adaptation projects are among the quickest and easiest ways of achieving active community engagement and of delivering tangible and immediate benefits at a community level.  It is to be hoped that the anticipated implementation plan offers more clarity in terms of adaptation-related actions.

Missing from this is the recognition that looking after what we have now is a key strategic objective and “adaptive” project. properly maintained buildings, streetscapes and green spaces prevent loss of carbon.  It also provides a long-term bridge to developing sustainable options in the future.  For example, it might not be possible to increase the physical capacity of the City’s run-off sewer systems in even the medium term to deal with increased cloudburst events.  It is possible to increase the maintenance regime to ensure that the existing system is clear and functions to its maximum capacity.

Download and read a PDF of our full detailed response here.