Where next for the Edinburgh Events Sector?

The commercial events sector flourished in Edinburgh, until the Coronavirus. How can it recover? Understandably, the industry and its cheerleaders in the press want to set the clock back to 2019 as quickly as possible. But siren calls for short-term fixes need to be treated with caution for a number of reasons. Firstly, Devi Sridhar, Professor of Global Public Health at Edinburgh University, warns ‘Make no mistake: there will be other pandemics’.  This bleak warning should be heeded, and built into civic and business thinking.

Secondly, it is now widely accepted that the growth model which carried the sector to dizzy heights during the previous decade cannot simply be projected forward. A report to the City Council in 2018 suggested increasing levels of negativity towards the city’s tourism and Festival offer, with people unable to get on with their lives due to the pressures.  Indeed, before Covid arrived, Edinburgh’s tourism sector suggested in its Edinburgh’s 2030 Tourism Strategy that “our guiding principle should always be to ask: how can we improve the quality of life for residents and contribute to the city’s broader economic goals.”

Thirdly, we mustn’t lose sight of the fact that whilst the events sector is important to the city, its economic value sits well behind public administration, finance, education and other sectors. These sustain Edinburgh year-round.

The growth of events in Edinburgh was spearheaded by the International Festival, then by the Tattoo and the Fringe, which then splurged out to embrace the stand-up comedy shows and circuses. The Christmas Market, fairground rides and live gigs followed. Commercial opportunities presented themselves in ways unforeseen.  Who’d have thought that charging for the “Loony Dook” on Hogmanay was necessary?

The more it grew, the more it grew, and with growth came intensification and concentration. To understand what happened, and to better manage the way forward, we need to see through the fog of ‘culture’, and to recognise that the council’s responsibilities for the wellbeing of citizens and the city involves more than signing contracts with big event organisers and letting them ‘deliver’.

The idea of agglomeration economies is well recognised in urban economics. It basically means that the big places have competitive advantages because they have a ready market, a pool of skilled labour, short supply chains for components, easier access to investors, and, not least, they are places to pick up new ideas and information. Similar types of businesses tend to cluster together to create and benefit from these advantages. That is one reason why there are so many financial services businesses here in Edinburgh. While business success depends on a host of other factors, the fundamental point is that place matters too.

Not all businesses are the same. Many require very fixed infrastructure such as factories and workshops, or offices. In some ways the events business is different. Only the very biggest cities, and not all of them, are able to support an array of massive theatres and the beehives of agents’ offices, small printers etc. etc. that cluster around them. Think Broadway and London’s West End. Arguably entertainment invented the gig economy – the clue is in the name. Typically workers in this industry are freelancers, jobs are short-term jobs, and mobility is built into the business model.  Performers move from place to place, while the impresarios (to use a slightly old fashioned term) stay rooted and clustered in the big centres but draw revenue from many other places.

Under-investment in infrastructure is endemic in the events industry. As in many businesses, investing in infrastructure is costly, ties up capital and is best left to somebody else. Maintenance is another expense, which gets more problematic if revenue is sporadic or below targets.  In the twentieth century, or in countries where local councils still have some fiscal autonomy and the civic pride and local accountability that goes with it, that investment often came from the public purse, or previously from philanthropists wanting to put something back into their home town. Concert halls and performing arts centres, often launched with lofty cultural ambitions, also served the commercial live events industry.

For the past two decades, Edinburgh has been manufactured as a place providing the biggest and best summer and winter event experiences. It is a finite space, with limited infrastructure. It is a space for temporary hire, with a particular premium extracted because of that, and especially for sites that monopolise spectacle or proximity to it. It is the biggest companies that can afford the prime spaces. Hence the ‘Big Five’ have come to dominate the Fringe – Underbelly, Gilded Balloon, the Pleasance, the Assembly Rooms and the University of Edinburgh, who own half of all Fringe venues. This all has consequences.

The growth imperatives embedded in tourism and festivals strategies and practices mean that potentially infinite demand meets finite space and infrastructure. The resolution is a search for new spaces that can generate and funnel money. There are spill-over benefits that event organisers and performers can capture by being in a particular part of this particular city at the right time (e.g. the Old Town or Princes Street Gardens in August or at Hogmanay).

There are also negative spill-overs from that same intensive exploitation of those advantages; collateral damage. In recent years these have included overcrowding and congestion; excess litter; restrictions on movement by, and even displacement, of residents; high noise and nuisance levels; and periods when non-paying members of the public were excluded from their parks and open spaces, which in turn were damaged environmentally by the duration and intensity of use for live events and paid amusements.

Before the pandemic hit, there were welcome signs that the tourism industry had got the message. Edinburgh’s 2030 Tourism Strategy recognised that ‘When residents have a good quality of life, and the built and natural environment is respected and protected, everybody benefits.’ Now some are disregarding this fundamental point in desperation to support the untrammelled return of the big events organisers.

Edinburgh attracts residents and visitors not primarily for its circuses and gigs, but because of its economic base in finance and public service, and its outstanding landscapes, public spaces and physical environments. A key reason why the city remains so special today is because over the last 150 years, local citizens have worked together as the Cockburn Association to protect and enhance its beauty and amenity.

Post-Covid we need Edinburgh to be an outstanding place to live, work and visit, with a resilient culture and live entertainment ecosystem too. An events sector looking back wistfully in the rear view mirror to 2019, and their highest ticket sales in EdFest history, while failing to acknowledge and mitigate the negative impacts on local residents of overtourism won’t take us there.

You can find more of Professor Hague’s blogs and other writing and get in touch with him at his website. 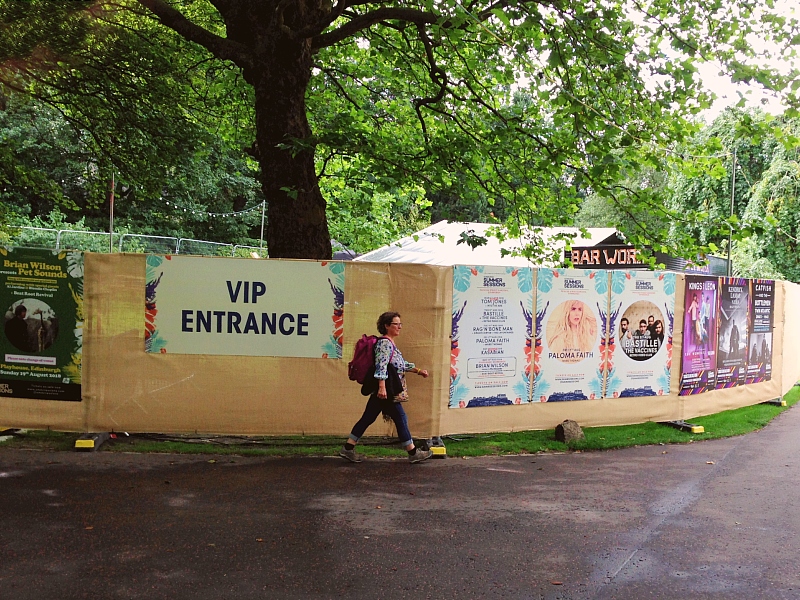