Letter from the Grassmarket

Some personal insights about living in the Old Town from long-term Grassmarket resident and local author Elspeth Wills.

This time last year I wrote a piece for the Old Town Community Council on what it was like to live in the Grassmarket during lockdown as a long-term older resident. So what has changed in the last twelve months?

The traffic has increased, although not the number of cyclists, despite the Council’s best efforts to promote active travel. We now have bus-islands and much larger gaps between bus stops on George IV Bridge, although I am not sure whether this is part of the Transformation Project, Spaces for People or the City Mobility Plan. Too many glossy strategies and not enough action on the ground. The one exception is the Roads Department who without any warning abolished residents’ parking in the Grassmarket and started fining offenders even those with residents’ permits and then equally mysteriously re-instated residents’ parking some weeks later.

The Council forgets that many of the few residents left in the Old Town cannot afford a bike or a car, are elderly and live in a geographically challenging area so are dependent on public transport to carry out everyday activities like shopping.

The area is largely dead and a sea of For Sale signs which highlights the lack of essential shops although the pubs are not boarded up in this lockdown. Last summer when lockdown eased, the pubs were quick to invade the public space with tables and chairs, and milk carton size servings of lager. The public space of Granny’s Green became an open-air bar. Some pubs were models of responsible behaviour while others even unscrewed the bolts on public benches to make more room for their customers.  The cranes over Richard Branson’s Virgin hotel, which were idle in the first lockdown, have kept swinging throughout the winter, revealing the enormity of the intrusion on the Cowgate. They are now applying for planning permission for a roof garden designed to appeal among others to ‘local residents’.

Ever since the Tourism Strategy to 2030, it is fashionable to pay lip service to the locals. The debate around rebalancing tourism and the Festivals rumbles on with little sign of action other than a general acknowledgement that something needs to be done to avoid a repeat of 2019. There is an emerging hard-line attitude among some Festival organisers that cancelling 2021 risks Edinburgh losing its status as world festival city. Only the Tattoo has consulted local residents and as yet our pleas for quieter and fewer fireworks and for an earlier end to the late night Saturday performances have gone unheeded. The Fringe just shrugs its shoulders when the closure of Victoria Street results within days of a huge new open-air stage for Fringe performers.

As someone active in the community, I have been involved in countless Council consultations on public spaces, winter festivals, active travel and short term lets. While I applaud the Council’s initiative, some surveys are better designed than others and the findings seem to go into a black hole and are rarely reported.

It is increasingly difficult to engage communities especially in issues like in zero carbon emissions when one part of the Council is wanting our views on climate change while another part is licensing yet more half empty tour buses to cruise the streets with their engines running.

There do seem to be cracks in lock-down. My kitchen overlooks a block of short-term lets in the Grassmarket and there are lights on at night. The only long term resident in that block confirms that the flats are being used, one being trashed by a drunken party, another having a pile of dog poo outside the front door. There are a few foreign tourists wandering about guidebook in hand

For most residents, like in all parts of the city, the novelty of lockdown and birdsong has given way to lethargy. Community spirit is weaker although there is still a lot of support available. The difference is that now you have to ask.

Online meetings are a way of life especially over the winter when it was too cold to meet outside. Our community group keeps having to remind organisations that not everyone has a computer and that the likes of Twitter and Facebook are additions to not substitutes for face to face communication.

And what of the future? Are we missing the buzz that tourists bring to the Old Town? Is it too late to restore the balance of community life in the city centre? I’ll know that things are back to normal when I am stopped in the street and asked how to get to the Castle or when I have to make a detour around a couple – often resplendent in Highland dress – as they have their wedding pictures taken on the Vennel steps. 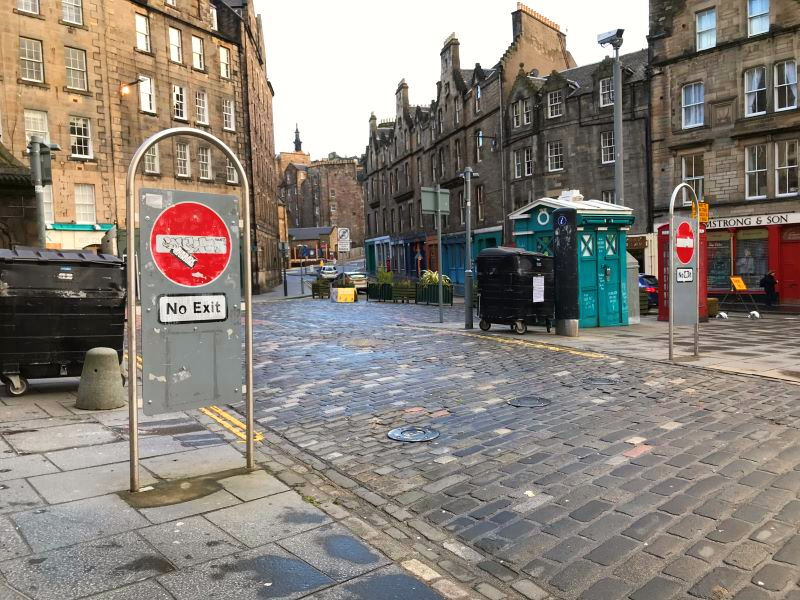