Are electric vehicles the way forward for Edinburgh?

Our Chairperson, Prof Cliff Hague, and Director, Terry Levinthal, ponder the future of Electric Vehicles (EVs) and the potential consequences to our streetscape of their mass adoption.

The current crisis at the petrol pumps this week (28 September 2021) due to a lack of lorry drivers and no doubt other factors highlights the continued issues and challenges in vehicle use and technology.

There is a head of steam – or perhaps clean energy – building behind the switch to electronic vehicles (EVs). Do they represent the way to achieve Edinburgh’s carbon reduction targets, and if so, what are the implications for our streets and neighbourhoods? With COP-26 scheduled for Glasgow later this year, this seems a good time to think through these questions.

Recognising that transport is a major source of CO2 emissions, the UK Government has stated that sales of petrol and diesel cars and vans are to be banned by 2030. This move has been hailed by Greenpeace as ‘a huge milestone for climate action in the UK’. The Scottish Government is offering interest free loans to encourage purchase: up to £35,000 to cover the cost of purchasing a new pure electric / plug-in hybrid vehicles, and up to £10,000 to cover the cost of purchasing a new electric motorcycle or scooter. However, the scale of the challenge in moving towards this position in a mere nine years’ time seems to be understated.  Currently, there were about 210,000 electric vehicles in the UK at the start of 2021. This is expected to rise to 12,000,000 by 2030.  Millions of new chargers will need to be installed across the UK and unlike a petrol station, proximity to places of work and home will be critical. 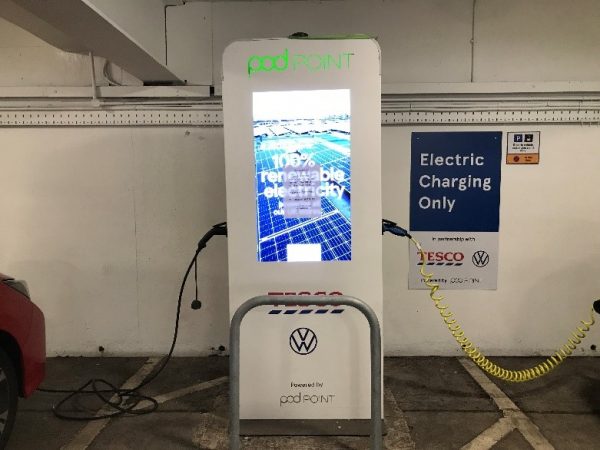 EV charging point at a supermarket car park. Increasingly common but how many more are needed?

The City of Edinburgh Council has an EV action plan. Some 66 on-street EV charging points are being installed across the city as part of the first phase of implementation. A further 145 charging points are planned for phase two, and options for future city wide EV expansion are being explored.  However welcome this is, it is nowhere near enough to satisfy current demand let alone a complete shift to electric vehicles across the city within 9 years.

It is easy to see the attractions of EVs. Emissions from transport are a significant contributor to climate change. In addition, EVs can improve air quality, a notorious ‘unseen killer’ fuelled by diesel and petrol engines. Encouraging consumers to shift their spending also helps with the narrative of a ‘green transition’, not least in respect of the promise of ‘green jobs’ being created that hold the prospect of paying decent wages.

The Society of Motor Manufacturers and Traders has suggested that up to 90,000 jobs could be lost in UK car manufacturing unless the government increases support for electric car production to German and US levels. It says at least 2.3M charging points are needed in the UK before the end of this decade.

However, there are some reservations. The production of EVs entails energy use and CO2 emissions, along with use of rare earth materials in battery manufacture. There is also the question of the source of the electricity to power the vehicles: is it from renewables or conventional sources? Can the grid cope? In addition, brakes and tyres will still contribute to unhealthy air pollution where EVs are driven. Electric cars tend to be heavier and so exacerbate this problem. Hydrogen-fuelled cars may offer a better alternative in the long term, but currently are at an early stage and are more CO2 intensive.

The limited distance an EV can travel induces ‘range anxiety’ amongst potential consumers, compounded by the time it takes to charge up.  Nissan’s LEAF advertises options from a 60 minute ‘Quick Charge’ taking the battery from 20% to 80% capacity, while an 11-hour 30 minute full charge will take the car a distance of around 239 miles.

You can charge at home, the workplace or at a public charging station.  That is, assuming you have ready access to a charging point.  Which magazine made the withering observation in its April 2021 article “Shock to the System” stating that “the UK electric car charging infrastructure is disjointed, confusing and costly, and not fit to support the millions of drivers who’ll soon need it”.

For many car-owning households in Edinburgh, home-charging is currently not an option since they live in flats or do not have in-curtilage parking. Indeed, one concern must be that the desire for home-charging will precipitate conversion of front gardens to parking/charging spaces. This would be seriously detrimental to amenity and area character in areas across the city.

In the dense urban centre, it seems likely that many charging points will be on the street.  Parking meters already add to the street clutter: will charging points sit alongside them, and by residents’ parking bays? The visual impact of lines of standardised cylinders fronting each side of a street could be a particular concern in conservation areas.  It is possible to convert existing lamp posts to charging points but the potential number required makes it inevitable that standalone chargers will be necessary.

Added to this, the RAC notes there isn’t yet a universal connector for electric vehicles and the different chargers. They report that each charger type (slow, fast and rapid) have their own set of connectors for low or high power, and for AC or DC charging, and lists 11 different connectors. Does this mean each station will need to cater for a wide range of connectors?  You can imagine the after-sales market for convertors akin to the mobile phone industry!

If the delivery mechanism for streetside chargers is left to the open market, it is possible that competing suppliers will want to have their bit of kit on your street too – remember what it was like when the telecom industry was deregulated and every operator had its own phone kiosk?

So will there be requirements on businesses and schools, for example, to provide charging points? How compatible would that be with other policies seeking to reduce car use in the city? These are issues that the long-awaited CityPlan2030, the new Local Development Plan, should address.

There is then the vexed issue of capacity in terms of generation and distribution.  Scotland’s biggest bus operator reported that it is building an all-electric charging station which will use the same amount of electricity to power its fleet as it takes to power a town of 10,000 people.  As Scotland seeks to de-carbonise and begins banning gas boilers in housing, etc, the demand for electricity will increase too. Do we have the capacity in the system to absorb this new demand.

In 2018, the Urban Design Group and Living Streets London held a conference Electric Vehicles: A Threat to Cities? It came at the EV issues from a different angle. They asked whether EVs were the solution to urban movement – and came away unconvinced.

Their post-conference score sheet was:

Viewed in this way, adapting Edinburgh to accommodate the needs of EVs is not automatically the way to go.

The City Mobility Plan 2021-2030 envisages regional transport hubs ‘evolving’ on the edge of the city that will include EV charging points, where longer distance commuters can top up their cars while taking public transport for the last leg of their journeys or embarking on active travel.

Similar hubs are also intended for new developments and existing neighbourhoods. However, is it contradictory both to seek to limit parking in new developments and also to require charging points in the same development? Additionally, if home-charging tilts consumer preferences towards homes that can accommodate cars within the curtilage, developers are liable to argue that this should shape decisions on the viability of housing types and densities, and hence on the release of greenfield and Green Belt sites.  This, in turn, would exacerbate mobility challenges, not reduce them.

The move to phase out petrol and diesel is clearly a step to a greener future, but elides the wider question of how Edinburgh is to handle traffic, enhance its streets, improve residents’ health and wellbeing, and continue to function as a leading city for business and innovation?

Answers are not easy, but there needs to be more discussion with and amongst citizens than we have had so far.  The advent of EVs needs to be the start, not the end, of more searching thought about the future of our city. 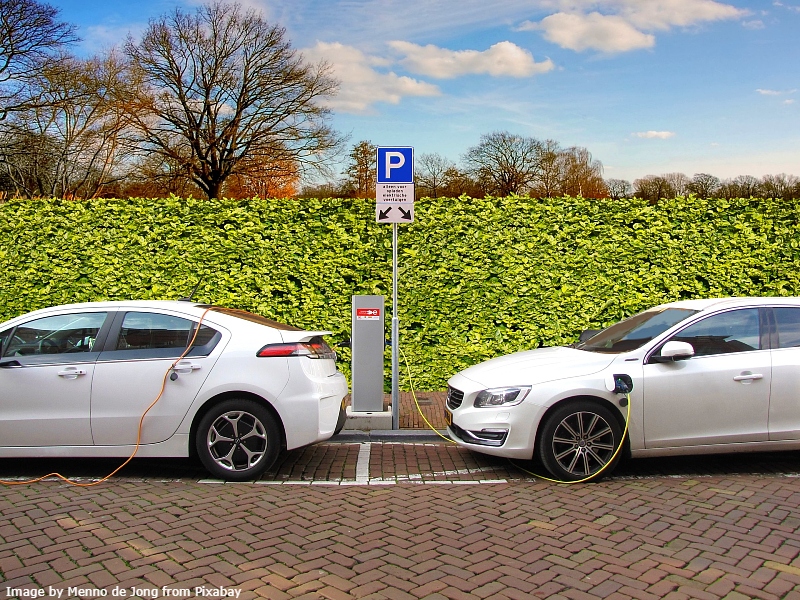