From its foundation in 1875, one of the main aims of the Cockburn Association has always been architectural conservation, including a history of campaigning to save many old buildings from dereliction and demolition in the City of Edinburgh. This broad objective mirrored a much later, marked change in perspective by the Town Council from one of progressive demolition of old buildings in the Old Town to one of conservation.   In 1910 an important early example of the Association’s direct intervention can be found in the Category A Listed Moubray House in the High Street which despite its age and long history continues to be well preserved and maintained to this day. It is of very great interest to residents and tourists alike who appreciate both its presence and intriguing history amidst the many historical buildings and sites of Edinburgh’s Old Town. 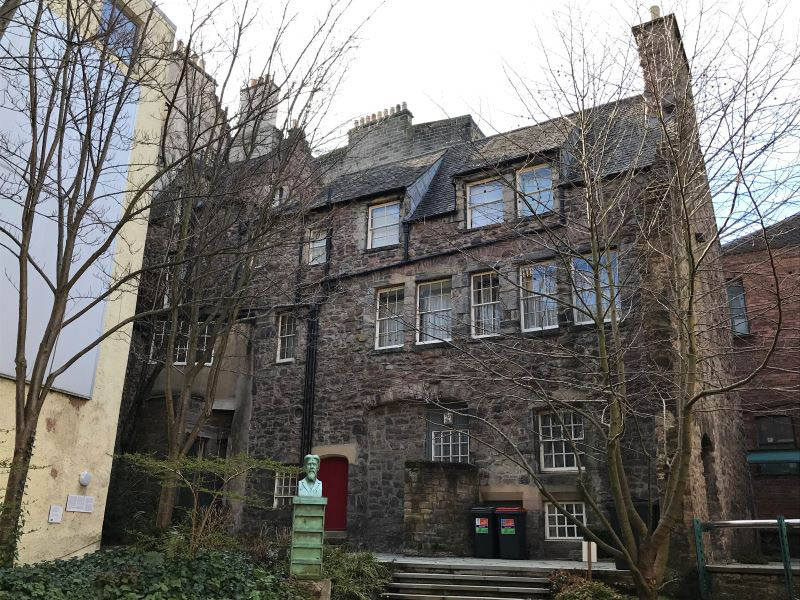 Moubray House at 51-53 High Street is one of the oldest residential buildings in Edinburgh and originally formed part of a small cluster of medieval buildings in the vicinity.  This street frontage  retains the line of the Medieval High Street with the House being the last property east before the defensive narrowing of the Gate.  In 1369 3 houses along the Netherbow were recorded as all belonging to the Turing family whose name is now remembered as Trunk’s Close. The property known today as Moubray house was first built by Robert Moubray in 1477 with some of the masonry construction still visible at the top of Trunk’s Close today.  However, the building in its current form dates from 1529 when it was substantially reconstructed and extended northwards towards the Waverley Valley.  It lies on the north side of the High Street between Trunk’s (or Turing) Close and the John Knox House near the site of Edinburgh’s Netherbow Port.  This was the Main Gate into the City before its demolition in 1764.   On the pavement in front of the property the Netherbow Well has survived, this being one of the wells that formerly supplied water for the Old Town. 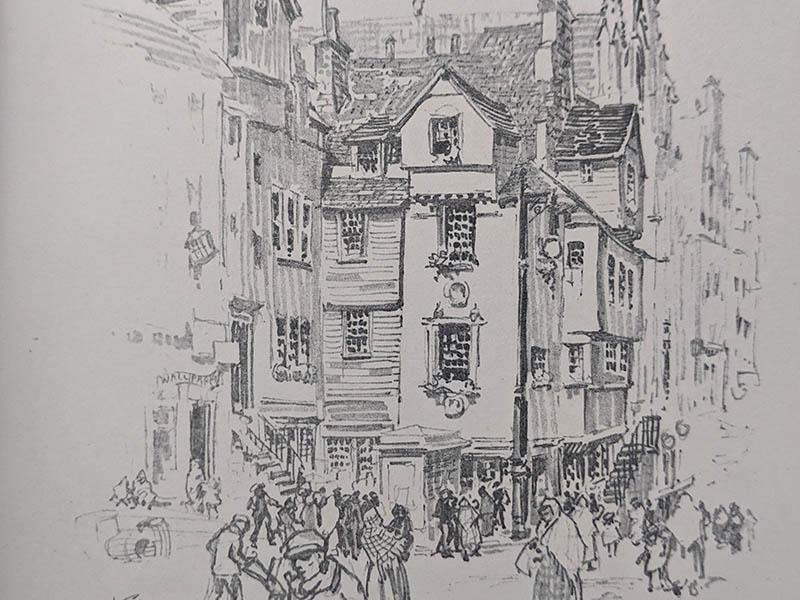 The tenement house built by Robert Moubray in 1477 is a rare survivor of the Burning of Edinburgh in 1544 when Henry VIII ordered the Earl of Hereford to “put all to fire and sword, burn Edinburgh town”.  During the sixteenth century the owners of the tenement building were again all listed as members of the Moubray family. They were wealthy, well connected merchant families who also owned many other properties in the city. Their main business was the exporting of wool and the importing of textiles and fine cloth, including furs from Europe, mainly the Netherlands.  As early as 1496 it is recorded that Andrew Moubray sold cloth to James IV and accepted a gilt cup as payment for this purchase. The family’s royal connections continued as it is also noted that the third Andrew Moubray sold a crossbow to James V in 1527.  In the 1560’s a later Robert Moubray rented one of his other properties to the Town Council for the use of John Knox but the arrangement only lasted until 1565 when Robert exchanged the house with the lawyer Robert Scott in return for a loan. 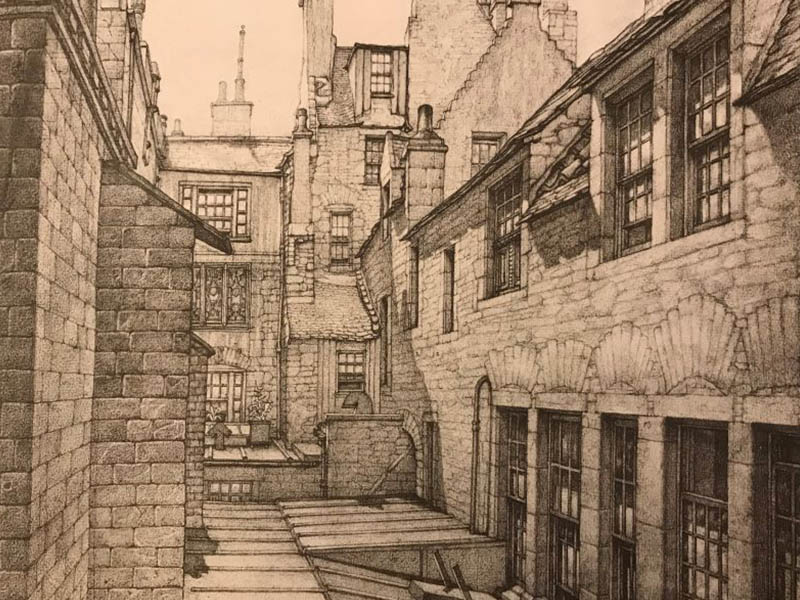 In the more recent past a number of notable citizens have been associated with Moubray House.  Scotland’s first eminent portrait painter George Jamesone lived here, as did Daniel Defoe the writer (author of Robinson Crusoe), a spy in the pay of the English Government and editor of the Edinburgh Courant.  He was also associated with the passing of the 1707 Act of Union with England.  Another occupier was Archibold Constable (1774-1827) who was a dominant force in Edinburgh’s growing publishing industry and proprietor of the Encyclopedia Britannica.  From Moubray House Constable produced not only the Edinburgh Review and Scots Magazine but also some of the best selling books of the time, including a substantial proportion of the work of Sir Walter Scot. A further publishing connection is with Moubray House Press, later known as Moubray House Publishing which was established in 1984 before moving across the High Street to Tweeddale Court.  In the 18th century the building housed a tavern and at various times since has been a shop selling both books, antiques and woollens. 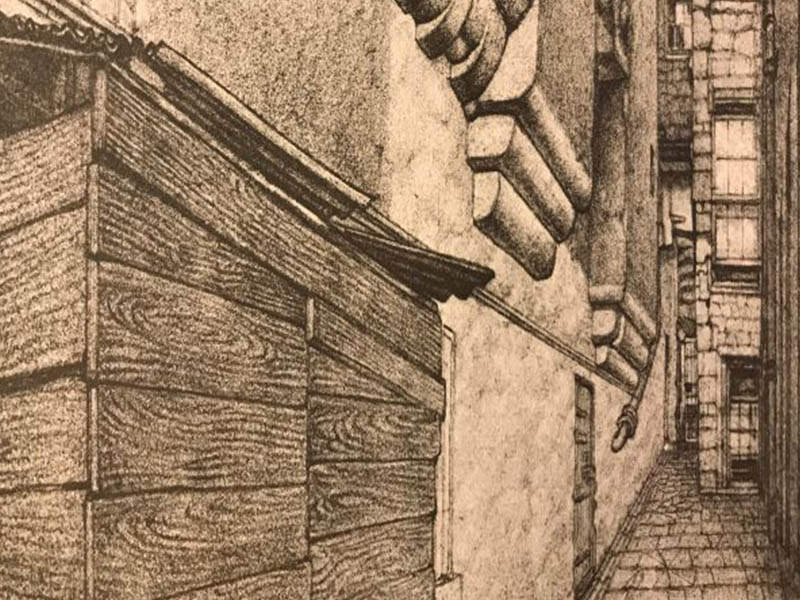 The property was subdivided at several times in its history and was operated as a Temperance Hotel for part of the nineteenth century.

In its current form, the tenement is best known for its interiors including a Scottish Renaissance board-and-beam painted ceiling of exceptional quality discovered in 1999. There is also a notable plaster ceiling with exotic fruit and flower mouldings and the arms of Pringle of Galashiels (5 escallops on a Saltire) dated 1650 painted on the wall. The attic apartment which forms the roofline of the building has an attractive  wooden barrelled vaulted ceiling.

Recognising the importance of both the interior and the exterior of Moubray House to the city and its prominent location on the High Street, the building was purchased in 1910 by the Cockburn Association following public subscription. As noted in The Trust Deed of the 16th January 1911 “The said moneys have been so subscribed in order that they might form the nucleus of a fund for the purpose of purchasing the property in the High Street of Edinburgh, known as The Moubray

House with a view to its preservation”. (It is interesting to note that the many signituries to this Trust Deed included those of a Robert and John Moubray). This initiative saved the house from disrepair and commenced a further chapter in its long history  The appointment of Trustees was made both to enhance the importance of the historical and architectural interest of the building, together with the objective of allowing public access to the interior.  In 1946 the Trustees accepted with gratitude the gift of Belle Kilgour of an external bronze memorial plaque bearing the head of George Jamesone.  The Cockburn Council minutes of 1961 noted that 3 of the Trustees were Cockburn Association members and 2 were Cockburn Council members.  The Trustees made a practice of regularly visiting the property and noted in the minutes of their meetings any renovation or modernisation which had been undertaken on behalf of current occupiers. Over the years such things as gable grouting, chimney and roof work, panelling inspection, fumigation, floor restoration and paper stripping were all well documented. 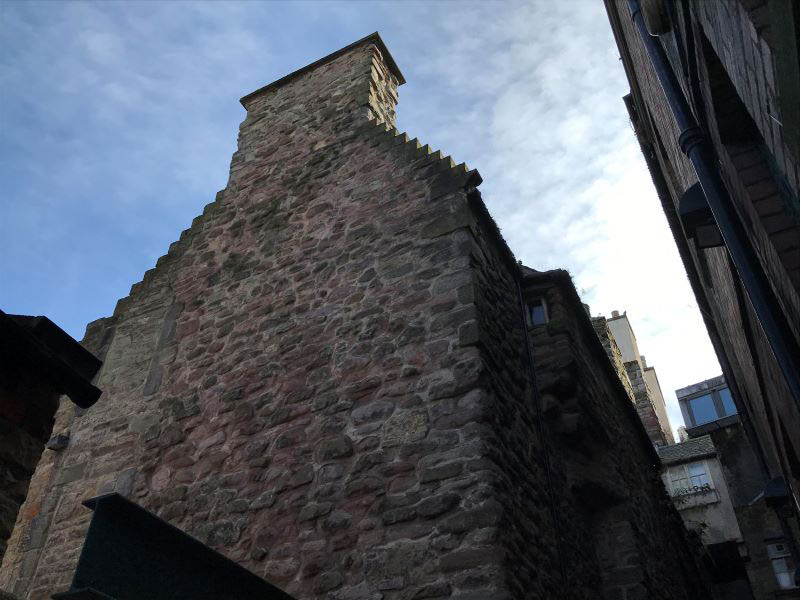 The property was gradually divided into four flats and rented out to various tenants over the years. From 1937 to 1963 the property was the home of a Mrs Esther Henry who ran an antiques business out of a shop called “The Luckenbooth” on the ground floor of Moubray House. This was a favourite haunt of serious antique collectors, including royalty in the form of Queen Mary, the Queen Mother and Princes Margaret in 1948.

In 1979 the assets of the Moubray House Trust were transferred to the Cockburn Conservation Trust which allowed, among other things, the building’s freehold to be sold to the lease holders of the property, if and when required. In the minutes of this newly formed Trust it states “The object for which the company is established, either on its own or in conjunction with others, the maintenance and improvement of the amenity of the city of Edinburgh and its neighbourhood and the protection and preservation of the city’s landscape and historic and architectural heritage by any means. In particular by the acquisition of such lands and buildings of historic and architectural interest as the Board of Directors of the Company may select for the purpose of restoration and sale or lease subject to such legally valid restrictions as well as to ensure the preservation of such land and buildings”.

The last owner of Moubray House was Debra Stonecipher, an American who had become enchanted with the property whilst retracing her Scottish roots with her grandmother.  In 2012 she decided to gift the house to the Scottish nation over the following 10 years under the auspices of Historic Environment Scotland.  The longer term proposal for Moubray House is now to operate the building as a visitor centre offering specialist pre-booked tours with a detailed interpretation of its origins, history and development over the centuries.

The Cockburn Association remains connected with Moubray House to this day occupying the two northernmost cellars of the house as its current offices in Trunks Close. 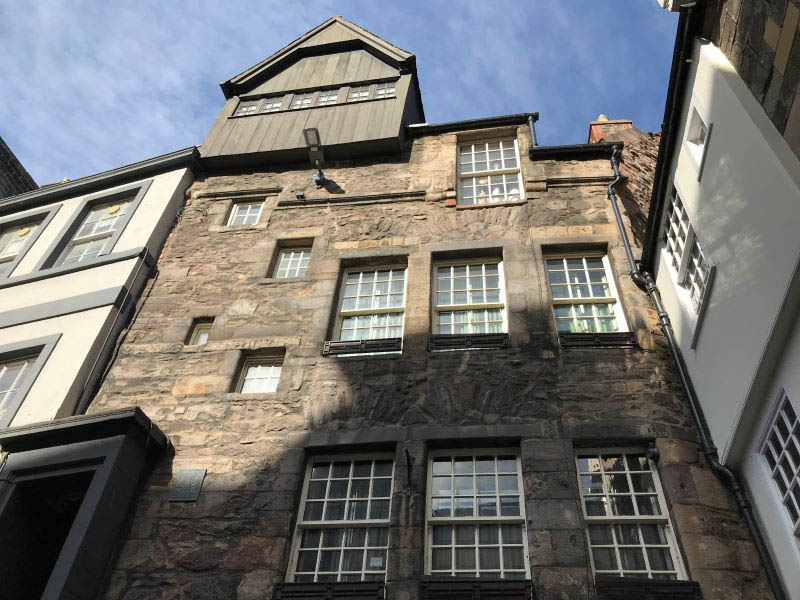 In 1910 an important early example of the Association’s direct intervention can be found in the Category A Listed Moubray House in the High Street which despite its age and long history continues to be well preserved and maintained to this day.