The Early History and Later Development of East Craigs

Blaeu’s Atlas of Scotland published in 1654 shows East Craigs and other local settlements including Southfield and Cramond.  It may also show the Bughtlin Burn entering the Almond.

This area was largely agricultural, made up of several farms, such as East Craigs and Southfield. Cereals and potatoes were the principal crops alongside cattle. The names of some of the later roads and housing developments in East Craigs reflect this rural past: Hayfield, Mearenside, and Burnbrae.

The land was owned by a number of large estates, which over the years included those at Barnton, Cramond, Braehead and Cammo.

This pattern began to change when in 1920 East Craigs Farm, amounting to some 111 acres, was purchased on behalf of the then Seed Testing Station by the Board of Agriculture. New laboratories were built, but the original 1768 Craigs House, with its semi-octagonal stairwell, was retained. 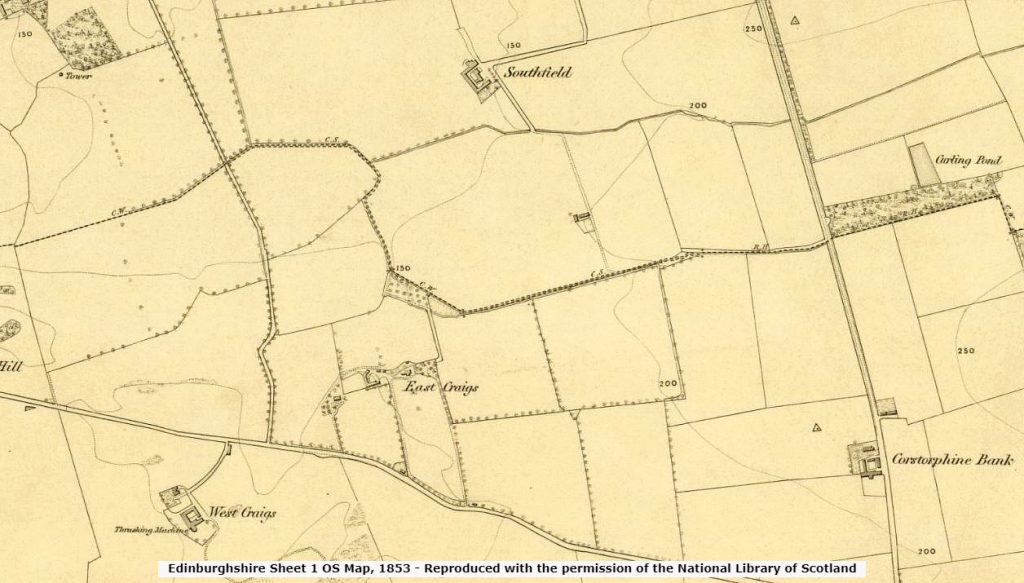 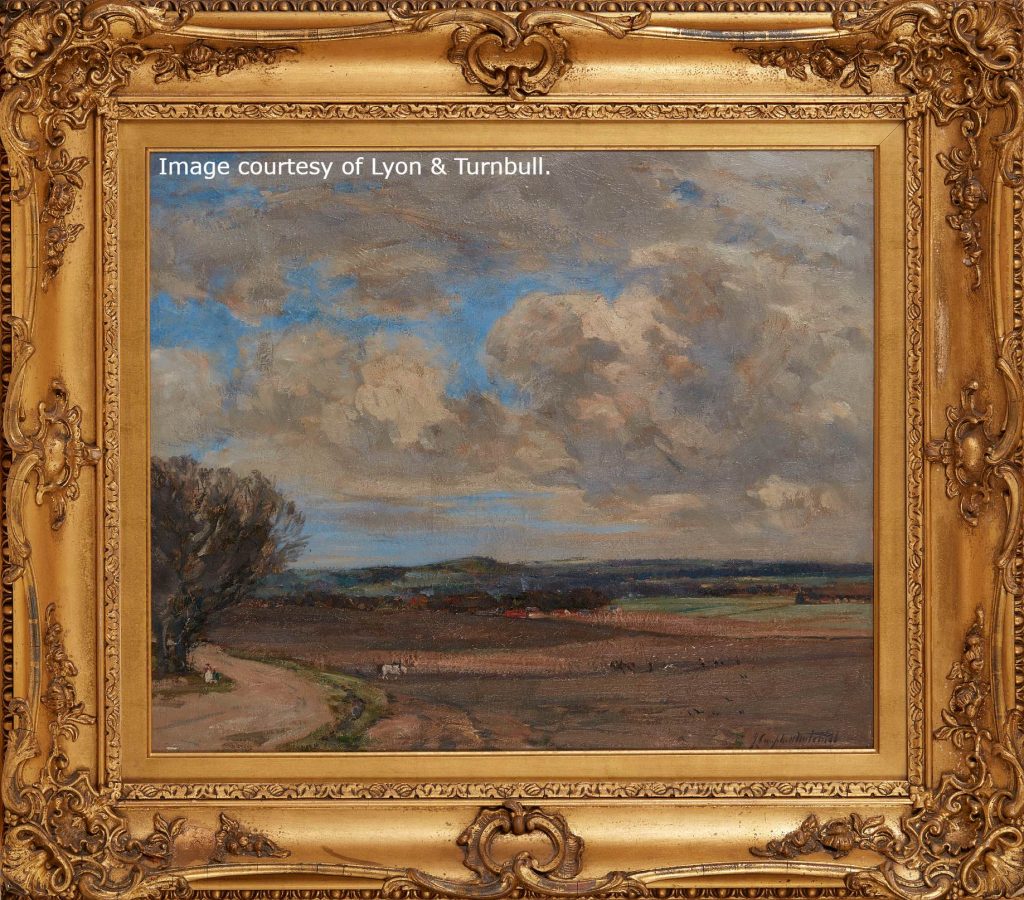 The opening up of the north western sector of Edinburgh for urban expansion was initiated by the construction of the Maybury Road in 1936. At a time of mass unemployment infrastructure projects like this were part of the government’s employment promotion measures. Both sides of the road, known as East and West Craigs, consisted of prime agricultural ground designated as green belt. The fields on the west side of Maybury Road were still considered green belt until recently.

The first housing development in the area was on what had been Southfield Farm. This was undertaken by the Southfield Co-ownership group between 1963-65. Recently the City recommended that this development be designated as a Conservation Area as a good example of modernist vernacular architecture.

In 1969 the Labour government decided that there was too much land zoned for housing that was not being developed. The green belt owned by the Barnton and Cramond Estate at East Craigs fell into this category, having been rezoned for housing some years previously. To stimulate house building the Betterment Levy was introduced. To avoid paying the levy the estate took the decision to sell off its land at market value to committed developers.

The Housing Corporation was established by the UK government in 1964 with the aim of promoting the concept of shared ownership housing societies. The availability and purchase of the land at East Craigs would enable it to pursue this role to a far greater extent than had been possible elsewhere. To this end the Housing Corporation bought the remaining East Craigs land, providing one third of the funding with the remainder coming from building societies.

The Housing Corporation appointed the Scottish Special Housing Association (SSHA), a government agency, to draw up a Master Plan for the whole area. This was subsequently approved by Edinburgh Corporation as the planning authority.

Copy of original plans drawn up by the SSHA for house plots in Burnbrae and BurnsideThe first stage of the development was the construction of the central spine road – Maybury Drive. This was unusual in that it was part dual carriageway although ultimately ending in a number of cul-de-sacs. Maybury Drive was the only access road into the East Craigs area; this prevented vehicle short cuts developing between Maybury Road and Drum Brae.

The East Craigs plan also included provision for a shopping centre, pub, medical and dental facilities, church hall, and a telephone exchange serving the area. Three plots were set aside for future primary schools. A further feature was the inclusion of walking/cycling paths separate from the roads.  There was also an office block planned adjacent to the Mid Yoken pub; this was consistent with the then policy of dispersing offices away from the city centre.

An integral element of the SSHA’s plan was the formation of a landscaped earth bund bordering the Maybury Road, extending from East Craigs down towards the Barnton junction.  This acted as a sound barrier to protect newly built houses from the noise of the increasingly busy Maybury Road. It also provided a landscaped limit to the city’s urban edge.  This feature has proved to be an asset to the area as a whole and has been repeated by other developers further along Maybury Road.

In 1974, at the beginning of the second term of office of the Labour government, there was a policy change whereby priority was given to the development of housing associations. At East Craigs this initiative led to developments by associations such as Margaret Blackwood (for disabled people), Edinvar (for single persons) and Lowland (for the elderly). This accommodation can be seen today around Bughtlin Market.

The policy of the 1979 Conservative government meant the Housing Corporation had to sell off its remaining land holdings to private building companies. Plots at the north end of the East Craigs area were bought by Wimpey Housing. Those at the south towards Craigmount High School were developed by Boland and Tom Hart (the ex Hibs owner). The price paid for the land was in the region of £26,000 per acre.  One small additional development of self-build plots was set up along North Butlin Road. 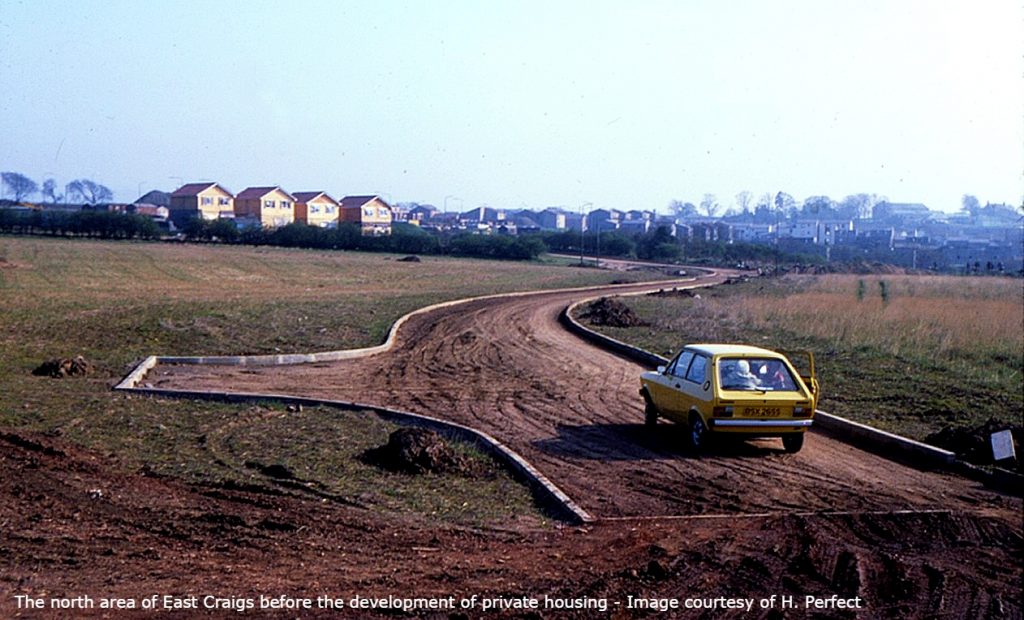 In the early 1970s the overall density of a housing development was a factor in its approval. At East Craigs the initial planned density had to be reduced. This  was achieved in part by setting aside an area for 46 private houses. These had an average plot size of one sixth of an acre, compared with the overall density of some 8 dwellings per acre. Associated with this development was a private parkland of over two acres – the Burnpark. Individual housing plots were priced at between £5000-£6000, with the prices set by the District Valuer.  The income from the sale of these plots enabled the Housing Corporation to break even when its final financial assessment was drawn up. It remained the superior to the individual buyers or feuers.

The SSHA produced a development brief for the 46 plots built around the cul-de-sacs of Burnside and Burnbrae. This also ensured some coherence across the individual house designs. Guidance included: height restrictions on the houses on Burnbrae so that the dwellings would not dominate the landscape; the double planting of beech hedges along garden boundaries adjacent to the Burnpark; the planting of three trees within each plot; the use of white harling and blue engineering bricks for outside walls; and grey roof tiles. 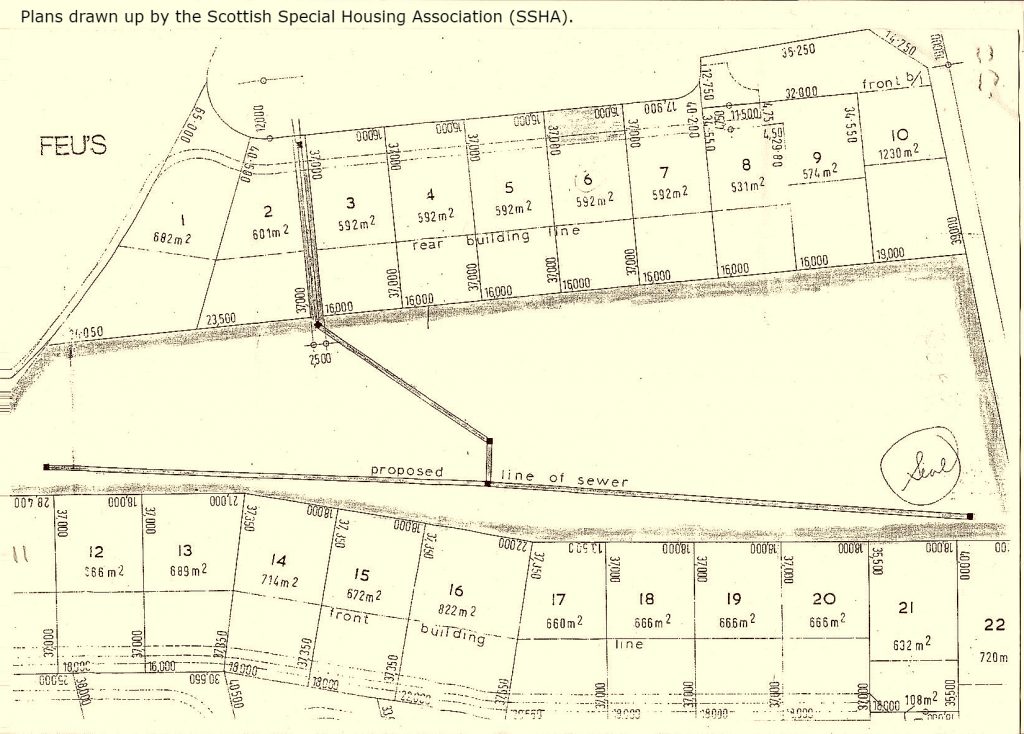 The owners of the plots adopted various strategies in the design of their houses. Some employed architects; others designed their houses themselves; timber framed houses were also used; and others modified pre-existing plans. A number of owners had links to local building firms and others were themselves architects or surveyors.  The occupants at 26 Burnbrae were the first to move in during August 1974, although they still had work to complete.  Other early occupants were at 25 and at 23 Burnbrae.  The first occupants in Burnside were at numbers 1 and 10, at either end of the road.

Almost as soon as plot owners started to build their houses the national economic environment changed. During the Heath government of 1970–74 inflation rose steadily to over 25%.  This led to the rise in the price of building materials and to supply shortages. Prospective residents took the opportunity to share information about building supplies in order to help each other out.

The Burnpark itself was collectively owned and managed by the 22 houses surrounding it. Its layout was designed and planted by the SSHA’s landscape architect. It had a large sloping grassed area with groups of trees of different varieties. Later, additional trees were planted by the residents.

During excavation work in the Burnbrae/Burnside area many large boulders were unearthed and these were used to form elements of the landscaping of Burnpark.

The Burnpark proved a great asset for the surrounding houses. With many of the original householders having growing families the area was very popular. Events were organised including an annual bonfire, charity sales and sports days.  Sledging was popular after snow falls. Recently an annual Lunch in the Park has been held. The wedding of Prince William to Kate Middleton was celebrated in this way as was the Queen’s Diamond Jubilee.

Although the original plan for East Craigs had three areas set aside for primary schools only one was built: East Craigs Primary School. This opened in 1978.

Initially Safeway occupied the largest unit in the Bughtlin Market shopping centre. There was also a John Menzies (newsagent), hairdresser (Jane Montgomery), a pharmacy; and a video hire shop.  In 2004 Morrisons bought Safeway but sold up once its new supermarket opened in the Gyle Centre.  Subsequently the store became a Somerfield which closed in 2012.  Soon afterwards all the original shops were demolished and the surrounding area developed for housing. A reduced shopping centre was included with a Co-op, chemist, take-away and charity shop,

The ‘Seed Testing Station’ (Scottish Agricultural Sciences Agency – SASA) had been a fixture in the area since the 1920s. However, from 2000 SASA began to develop its Gogarbank Farm site near Ratho. In 2005 SASA moved all its facilities to this farm and its 17 acre site was sold to CALA Homes (for some £35m). The original modified farmhouse, Craigs House, was retained and restored as part of the development’s planned high amenity, mixed density design. The estate was completed in 2015. The original plan had included provision for the retention of many of the original trees on the SASA site. However, at the time of its completion few of these remained.

Until recently East Craigs had always been recognised as forming a well-defined western boundary to the city by a combination of the Maybury Road (which in turn is a continuation of the city bye-pass) and the extensive bund that runs from the Barnton junction to the Maybury roundabout. Starting in 2021, the extensive housebuilding on agricultural land at Cammo and Turnhouse has pushed the western boundary of Edinburgh’s green belt further out to the west. 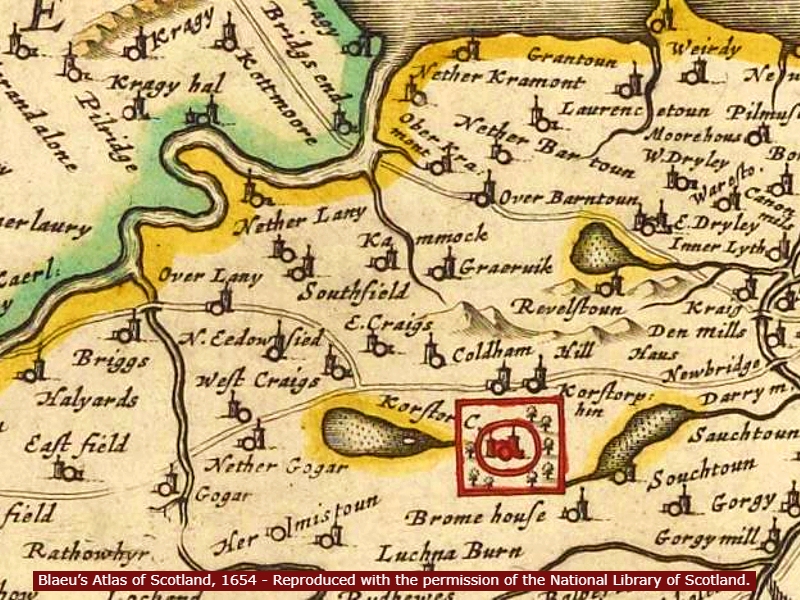