The 1919 Housing, Town Planning, etc Act was a watershed in the development of British housing policy.  Two of the Act’s provisions were particularly important.  For the first time, local authorities were given a statutory duty to assess housing needs and adopt measures to meet these needs, either directly or by encouraging appropriate action by other bodies.  Also, for the first time, financial assistance from central government was made available to support new housebuilding for general needs.

These key provisions were intended to address the specific conditions that were apparent at the end of WW1.  There were housing shortages in many parts of the country and a national response was necessary.  Moreover, during the course of the war, the costs associated with new housebuilding had tripled and new construction for general needs was virtually suspended for the duration of the conflict.  Without generous subsidies from central government, it was extremely unlikely that an effective national housing drive could be mounted.

On hustings for the December 1918 general election Prime Minister Lloyd George and other politicians raised expectations about the provision of “Homes Fit for Heroes” and “A Land Fit for Heroes to Live In”.   The most pressing priority was usually considered to be decent accommodation for families with children.

Given the limited experience of many local authorities in direct housebuilding, the administrative procedures for the development of 1919 Act housing were closely controlled by central government.  Tight supervision was seen to be warranted to ensure value for money.  In addition, firm controls were set on the physical form of housing in terms of structure type and density levels.  There was a clear preference for low-density Garden City style developments which were relatively uncommon in Scotland at the time.

Despite a generous system of central government subsidisation, there were still significant problems with affordability of the new “Homes Fit for Heroes”.  The poorest sections of the population – including many military personnel returning from combat – were unable to afford the rents required for the available accommodation.  Then in July 1921, as part of a general round of public expenditure cuts, the financial arrangements for 1919 Act housing were withdrawn, though any developments that were fully approved at this stage were allowed to proceed to completion under the original provisions.

The 1918 Final Report of the Royal Commission on Housing in Scotland set out a conservative estimate of unmet housing needs in urban and rural areas.  In order to ease the general shortage, relieve severe overcrowding and replace seriously substandard properties, a minimum of 240,000 new or substantially improved properties were thought to be required.

In this context, the 1919 Act was a disappointment in quantitative terms.  Between 1919 and 1925, only 25,500 units were completed in Scotland under the provisions of the 1919 Act.  Of these, 25,000 units were produced by local authorities and 500 units by voluntary bodies and public utility societies.

However, in qualitative terms, the physical standards achieved were impressive. More than 300 separate developments were completed in Scotland.  By and large, over the years, these areas have been well maintained and perceived by residents as highly desirable places to live.  Many have become cherished symbols of the “Homes Fit for Heroes” vision and the enduring influence of the Garden City movement on the built form of working-class housing in Scotland.

Ironically, although the 1919 Act developments were originally the product of local authority stewardship, at present local authorities no longer play a prominent part in their management and maintenance.  The vast majority of these properties have been purchased under the Right-to-Buy legislation since the 1980s.  Local authority ownership is now at negligible levels and the market value of these “Homes Fit for Heroes” is well beyond the financial reach of households in acute housing need.

Of the 25,000 units produced by Scottish local authorities under the 1919 Act, 63% were officially classified as single-family cottages, built either in short terraces or in semi-detached pairs.  A further 31% were classified as cottage flats, usually built in 4-in-a-block structures.  The remaining 6% were within 3-storey pavilion-style tenements of the type recommended by the Royal Commission.

The placement of a statutory duty on local authorities to meet housing needs meant that the 1919 Act properties were widely dispersed within Scotland.  Approximately 30% of the 25,000 local authority units were built in locations out-with burghs.  These developments in rural areas and smaller settlements usually involved a handful of units.  Amongst the larger Scottish burghs, by far the largest number of 1919 Act properties was produced by Glasgow Corporation, which managed to complete nearly 5,000 units.  The most ambitious single development was Glasgow’s full-scale garden suburb of Mosspark, which contained as many as 1,500 units.  The planning of Mosspark was particularly impressive for its time.  At suitable locations on the site, land was reserved for a wide range of community facilities including a school. a church and church hall, bowling greens and local shops.

The illustrations of Edinburgh’s 1919 Act housing focus on two of the larger developments at Chesser and Northfield.  Site maps are provided to give readers a sense of the street layouts and general positioning of the properties. 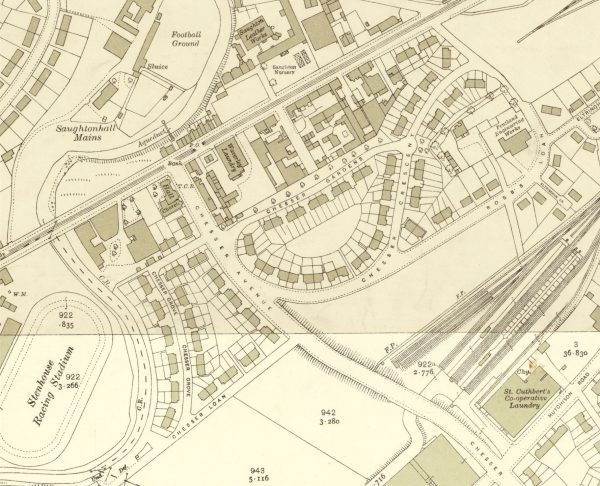 Street plan of the Chesser neighbourhood (Reproduced with the permission of the National Library of Scotland). 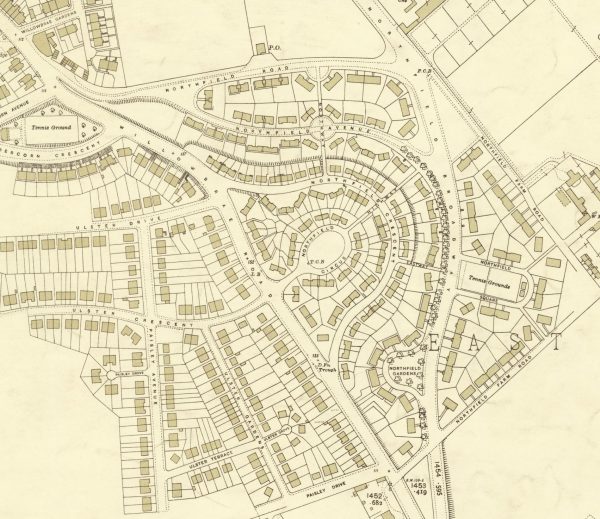 Street plan of the Northfield neighbourhood (Reproduced with the permission of the National Library of Scotland).

At Chesser, an area of open space was provided for residents’ allotment gardens which is still well used to this day. The housing stock at Chesser is a fine example of well-crafted, stone-built cottage flats.  The upper properties within the 4-in-a- block structures were intended for larger families and there is some available space for sleeping quarters at roof level. 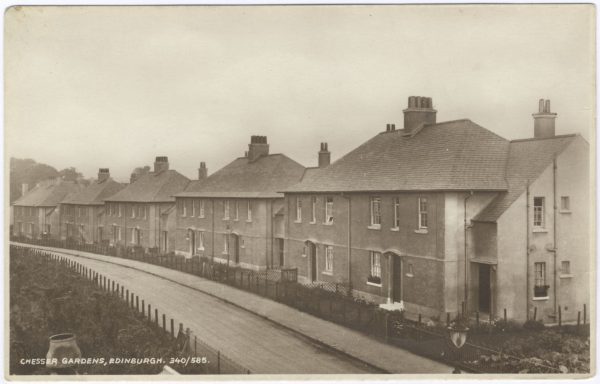 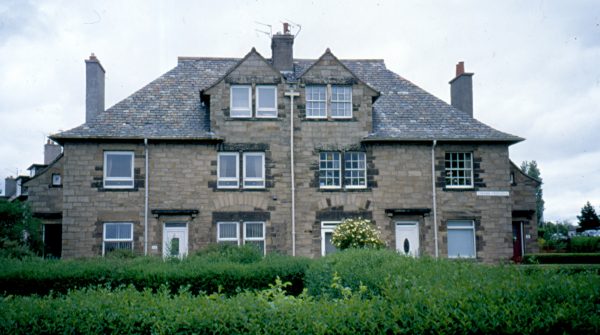 Four in a block housing in Chesser Gardens, Edinburgh. 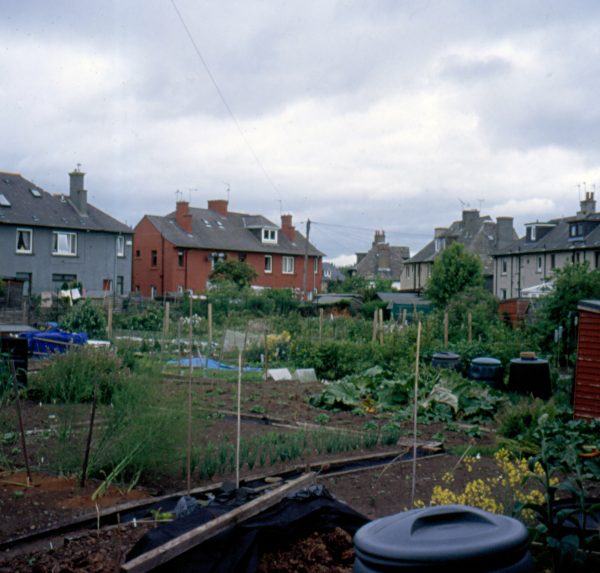 At Northfield, the 1919 Act units are presented within a distinctive mix of structure types along each of the street frontages.  Most of the buildings are cottages and cottage flats, which sit happily alongside a number of free-standing, 3-storey pavilion style tenements.  On the sites where cottage accommodation was built, the grouping of properties around small common greens is particularly effective. 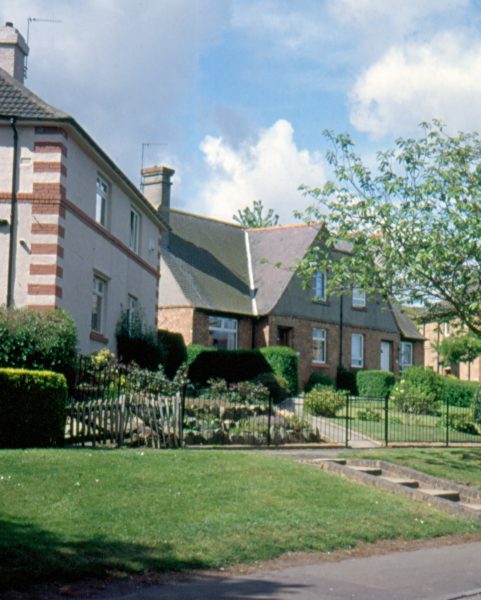 Examples of housing in Northfield, Edinburgh. 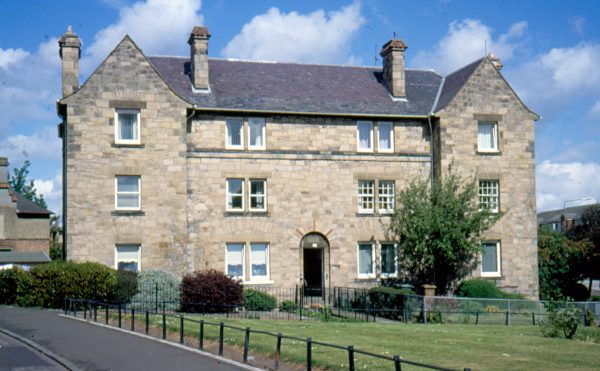 Six in a block housing in Northfield, Edinburgh.

On the periphery of Edinburgh, some of the most charming examples of 1919 Act “Homes Fit for Heroes” are found in East Lothian.  The architectural practice of J. M. Dick Peddie and Walker Todd were responsible for a series of highly attractive developments at Dirleton (Fidra Avenue), Gullane (Hopetoun Terrace), Longniddry (Elcho Road/Terrace) and Macmerry (St. Germain Terrace).  These achievements are readily apparent in the visual images that follow. 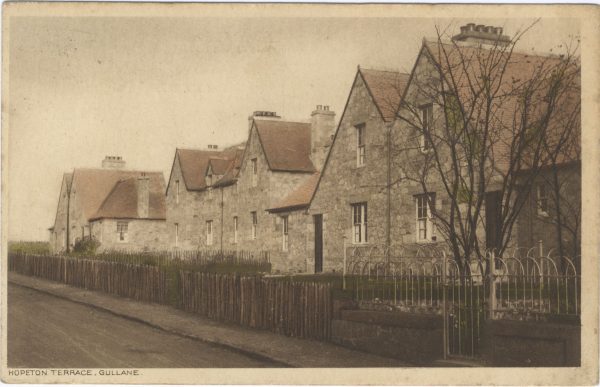 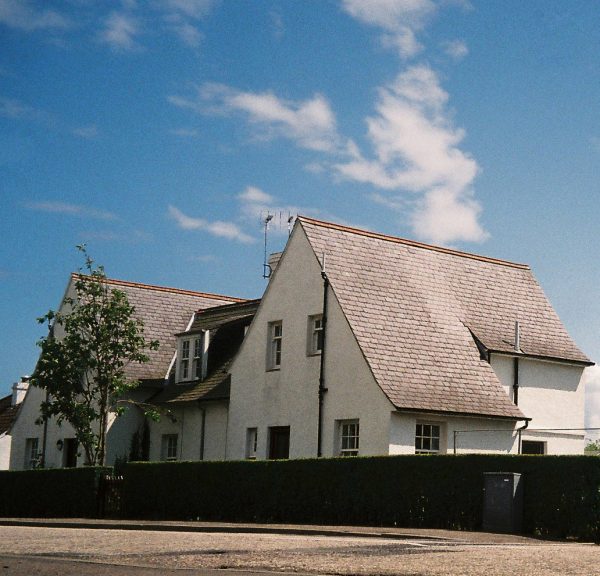 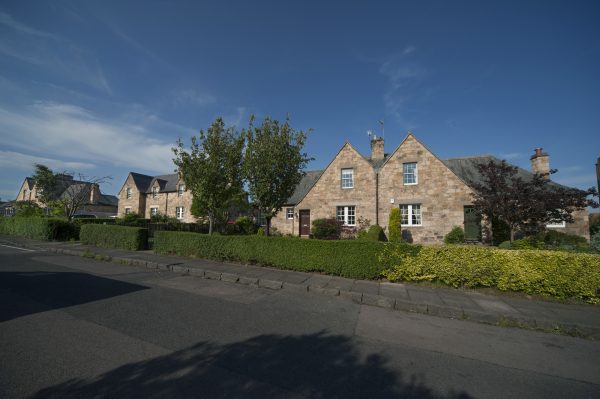 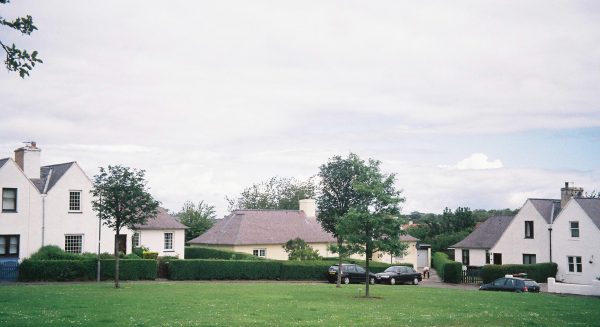 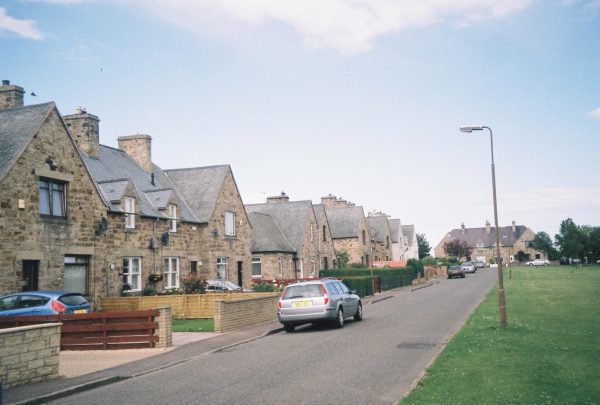 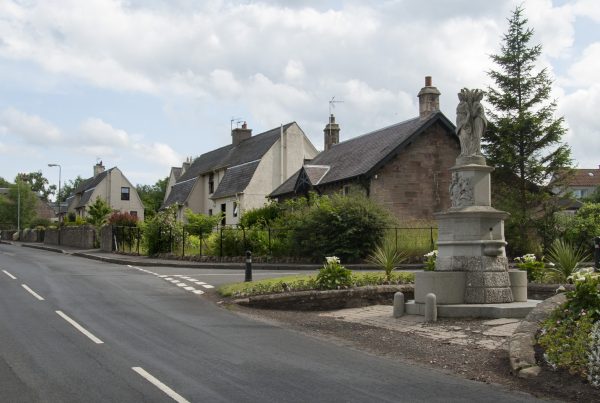 In summary, a century later Edinburgh and East Lothian still enjoy the housing legacy of the 1919 Act. Though the number of houses was not huge, their popularity endures.

Lou Rosenburg is an honorary fellow based at the Scottish Centre for Conservation Studies, University of Edinburgh. He is the co-author of two previous books, Renewing Old Edinburgh: The Enduring Legacy of Patrick Geddes (Argyll Publishing, 2010) with Jim Johnson, and Urban Housing Policy (APS Publications, 1975) with William G. Grigsby.

Copies of his latest book, Scotland’s Homes Fit for Heroes, can be purchased here (free postage and packaging in the UK) 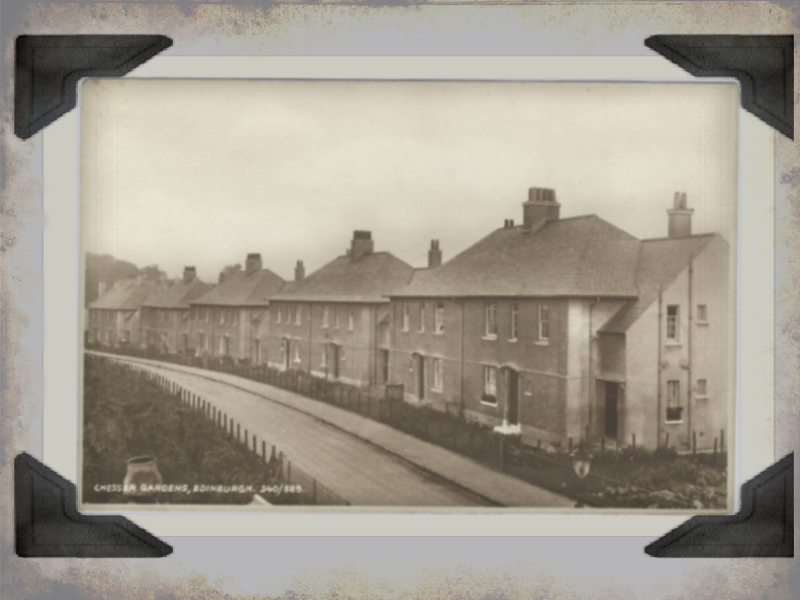