A blog from former Lothian councillor, Cockburn life member and former Cockburn trustee Lawrence Marshall recounting why he joined and, before long, took on a very active role in the Association

My first contact with the Cockburn Association was around the late 1970s or early 1980s when I was keen to prevent the demolition of the old landmark Abbey Church at Abbeyhill. I got to know the then director Oliver Barratt quite well – and I popped in to see him quite a few times in subsequent years at his office on The Mound as we discussed transport in the city. I soon became a life member of the Cockburn Association.

After over a year of unemployment following university, I had got a job as a bus conductor with Eastern Scottish – based at their New Street depot. This only lasted for about 18 months, however – as “One Man Operation” (as they called it back then) eventually spread to all routes. I then got a job as a freight guard at Millerhill rail yard in April 1982 – and became aware of the existence of the South Suburban rail line and how quickly a train could travel along it through a congested city. Made technically redundant by the doing away with guards on freight trains, I then became a cleaner at Craigentinny depot before getting a job as a passenger guard at Waverley around 1984. I helped with the campaign to try to prevent the closure of the Abbeyhill loop line – which was severed from the rail network at the time of the electrification of the East Coast Main Line in the late 1980s.

I was in touch with a good many folk at that time, including Cllr. David Begg. He encouraged me to pursue my wider view of transport in the city. I then organised an exhibition about the “South Sub.” at the Edinburgh Central Library – opened by the Convener of Lothian Regional Council, Cllr. Jimmy Cook. In 1989 I set up the Capital Rail Action Group (CRAG) to campaign for rail-based initiatives within and around Edinburgh – but being also supportive of wider public transport measures. As the Cockburn Association had done previously, I organised rail charters around the South Sub. – and I was indebted to members such as Prof. Arnold Hendry for their expertise and years of campaigning to improve transport provision in the city.

I became a train driver at Waverley in 1990 and then a Lothian Regional Council councillor for Portobello/Milton from 1994-1996 and a City of Edinburgh Council councillor for Portobello from 1995-2007. In 1997 I went back to being a passenger guard at Waverley. As a councillor, I was vice-chair of the Planning Committee for a good number of years before becoming chair of the Forth Estuary Transport Authority. FETA had been set up to be the successor body to the old Forth Road Bridge Joint Board as the Scottish Government wished the new body to not only operate and maintain the Forth Road Bridge but also, as a transport authority, to devise a transport strategy for the wider bridgehead area.

This we did – based on “smart tolling” to replace the old system of tolls which had been in place since the bridge was opened in 1964. No longer would it be cheaper for lorries – pounding the deck of the bridge – to get across the Forth more cheaply than buses which were helping to reduce congestion on the bridge and its approach roads. Cars with only one occupant would also be charged more than those with two or more. Computer equipment and smart tags were bought, the administration block expanded as a result, new toll booths with a fresh air supply installed and contractors employed to get the new tolling system up and running.

Moreover, we helped to fund the Ferrytoll park and ride in Fife and, much more significantly, the M90 link road between the bridge and the M9. The City of Edinburgh Council had no money to build the link road – and so FETA were asked to step in. But we were only able to sign the contract for the link road – which eased congestion on the A9000 and the bridge – because the Scottish Government agreed to lend us money on condition that we implemented the proposed smart tolls and then paid them back from the revenues raised. And then, of course, the Scottish Government abandoned smart tolling altogether! I joked at the time that we should have been called “Emmental” by the Scottish Government rather than FETA (a name no-one was really that keen on) because they had now shot so many holes in the very transport strategy they had asked us to produce and implement!

Now, there is a link to the work of the Cockburn Association here. They had led the ForthRight Alliance‘s successful campaign against a new road bridge proposed in the 1990s by the UK Government in its “Setting Forth” agenda. Following my failing to be re-elected at the first proportional representation council elections in 2007, I was asked to chair the resurrected campaign against a new bridge. It was a David vs. Goliath situation – and we didn’t win. I always believed that the corrosion on the “old” road bridge could be arrested in sufficient time to allow it to continue to operate – although this would have not been without disruption to traffic. At least the new Queensferry Crossing is, by and large and as promoted, a replacement for the Forth Road Bridge – as yet there has been no serious proposal to allow both bridges to carry full traffic loads. And the new bridge is a fitting 21st century companion to its 19th and 20th century companions.

Anyway, following my council defeat in 2007, Bill Cantley approached me to ask whether I would like to become a Cockburn Council member. I was delighted to do so. I had often joked during my time on the City Council that the only way, as a life member of the Cockburn Association, that I could resolve any conflict of interest was for someone to kill me! And I had been friends for many years with another Cockburn Council member, Paul Tetlaw, who had been a member of CRAG from its inception. As well as serving on Council, I was also a member of the Transport Sub-Committee and the Cases Sub Committee, being chair of the former for a short while.

The Cockburn Association has been key to the scrutiny of developments in Edinburgh for many years – leading campaigns in more recent years against, for instance, a 17-storey development at Haymarket and the hotel re-development of the Old Royal High School on Regent Road. They have also cast their critical eye on many smaller proposals over the years. I may not always agree with the stance taken on any particular issue – but the Cockburn long ago earned the right to be taken seriously and heard.

Long may that continue to be the case!

(Image above shows Lawrence Marshall with his father at Waverley Station on the day the latter (also Lawrence Marshall) retired in 1990 after a 42 year career with British Rail, that began as a fireman at St Margaret’s Depot and ended that day driving the Flying Scotsman from Edinburgh down to Newcastle – From the author’s own collection) 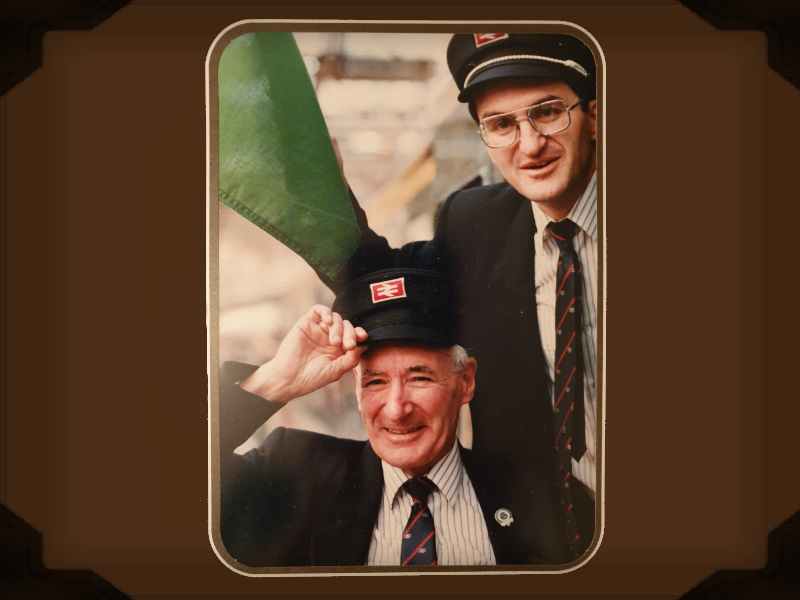