POSTED ON September 1, 2015 BY Margaret Jessop

This blog was written in 2015 by one of our volunteers, Margaret Jessop, to celebrate the Cockburn’s 25th year of organising Doors Open Days in Edinburgh

The growing interest in the public’s participation in European Heritage Days that promote an interest in historic buildings in Scotland springs from the wider context of the European scale rise in its linked cultural, social, economic and political history.

Against this background, the overall aim of the Doors Open Days scheme is to give people a greater respect and understanding of each others history (both internationally and nationally) through sharing and exploring cultural heritage even though there are marked differences in language and traditions.

This understanding helps the preservation and the enhancement of both the built and the natural environment and encourages building owners to display their premises to the public in general. This in turn creates a marvellous opportunity for residents and visitors to discover hidden architectural gems and see behind doors that are rarely open to the public, free of charge.

The first Doors Open Day took place in France in 1984 with “La Journee Portes Ouvertes” sponsored by the Ministry of Culture.  Due to its popularity, in 1985 the French Minister of Culture proposed at the second Conference of Ministers responsible for Architectural Heritage that the project should be internationalised under the auspices of the Council of Europe.  The Netherlands held their first “Open Monumentendag” in 1987, Sweden and the Republic of Ireland joined in 1989 and Belgium and Scotland in 1990.  In 1991 these events were united as European Heritage Days at the initiative of the Council of Europe, supported by the EU.  Since 1999 these Heritage Days have had a permanent slogan: “Europe, a common heritage”.  By 2010, 50 signatory states of the European Cultural Convention had joined the scheme.

The idea has also become popular outside of Europe with similar projects taking place in Canada, the USA and Australia at different times of the year.  In Argentina and Uruguay the corresponding “Dia de Patrimonis” takes place in September, whilst the same event in Chile is held in May.  It is estimated that overall some twenty million people now go to these events.

The SCT continues to maintain the national DOD website

As mentioned above, Scotland was the first part of the UK to “open its doors” to the general public. This took place in Glasgow in 1990 and formed part of its celebrations as European City of Culture that year. The popularity of the event encouraged other areas to take part the following year coordinated overall by the Glasgow based Scottish Civic Trust.  This organisation continues to perform this role each year.  The Doors Open Days across Scotland are now organised by dedicated teams of area coordinators who work for a range of organisations including local councils, and civic and archaeological trusts. The events are spread out over September in order to maximise the number of viewing opportunities open to the public and each year are organised around a specific topic or theme.

This event first took place in 1991 and has been organised for 25 years by the Cockburn Association that is based in Trunk’s Close off The Royal Mile.  An almost complete set of brochures is housed in this office for anyone wishing to see how the event has grown and developed over the years.

The Cockburn Association’s own 1991 report to The Scottish Civic Trust stated that this first event was sponsored by the Property Services Agency.  The list of building owners approached was gathered from its own sources, Edinburgh District Council’s Planning Department, Historic Monuments, Edinburgh New Town Conservation Committee and other informal contacts.  A total of 61 buildings finally opened their doors to the public that year.

The largest categories represented were churches (18) offices (10) and educational premises (9). The largest number of visitors was recorded by Fettes College who had 1000 attendees.  At the same time, the National Trust for Scotland (which normally charges an entry fee) reported up to 800 visits.  A further trend emerged that those buildings grouped together were the most popular.  The analysis of the event at that time also concluded that more volunteer helpers would be needed if both the number of venues and visitors were to rise, together with a need for more publicity material to broaden the interest. 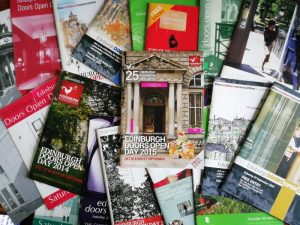 Some brief analysis of our collection of Edinburgh Doors Open Days brochures revealed the following points about this important annual event its first quarter of a century: 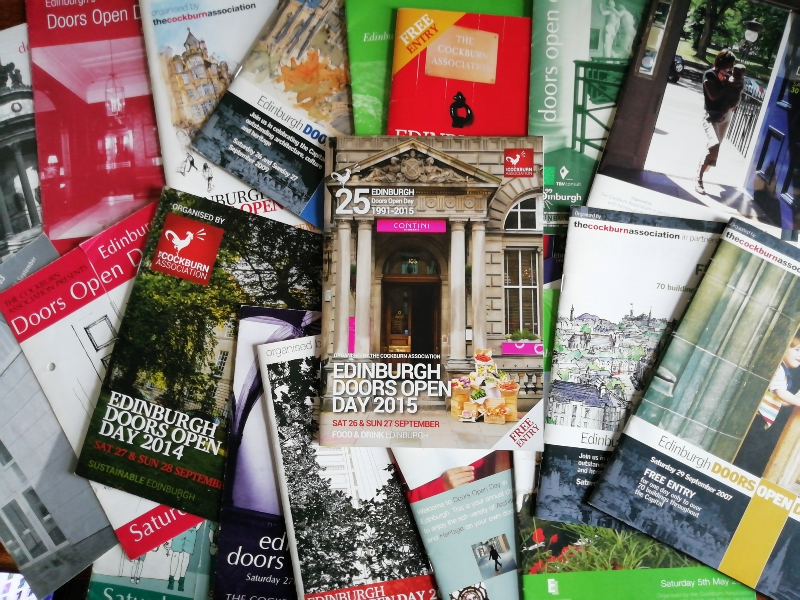